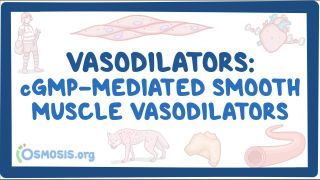 Hydralazine (Apresoline) is a direct-acting smooth muscle relaxant used to treat hypertension by acting as a vasodilator primarily in arteries and arterioles. By relaxing vascular smooth muscle, vasodilators act to decrease peripheral resistance, thereby lowering blood pressure and decreasing afterload.
Isosorbide dinitrate, ISDN, is a nitrate used pharmacologically as a vasodilator for angina (heart-related chest pain), congestive heart failure, and esophageal spasms.
Nitroglycerin belongs to a group of drugs called nitrates. These agents all exert their effect by being converted to nitric oxide in the body by mitochondrial aldehyde dehydrogenase. Nitric oxide is a potent natural vasodilator. Clinically, nitroglycerin is used as a medicine for angina pectoris, acute coronary syndrome, and pulmonary edema.
Sodium nitroprusside is a short-acting vasodilator primarily used in hypertensive emergencies. It exerts its effects by increasing cyclic guanosine monophosphate via direct release of nitric oxide. Its main adverse effect is cyanide toxicity.
Isosorbide mononitrate is a drug used principally in the treatment of angina pectoris and acts by dilating the blood vessels so as to reduce the blood pressure. It is sold in the USA by Kremers Urban under the trade name Monoket, also sold in the USA under the name Imdur, and marketed in the UK under the trade names: Monosorb, Chemydur. In India, this drug is available under the brand names of Ismo, Isonorm, Monotrate, Solotrate, and Monit. In Russia it is occasionally used under the brand names Monocinque and Pektrol.
References and External Links

cGMP-mediated smooth muscle vasodilators, as their name implies, are medications that promote dilation of blood vessels by potentiating the effect of cyclic guanosine monophosphate, or cGMP for short.

These medications are mainly used to treat hypertension, heart failure, and angina pectoris, which is a pain caused by reduced blood flow to the heart muscle.

Once synthesized, nitric oxide diffuses to adjacent smooth muscle cells in the tunica media, where it binds and activates an enzyme guanylyl cyclase.

These medications are actually prodrugs, meaning that they need to be converted into their active form, called nitric oxide, before they can produce the desired effect.

Ultimately, this results in vasodilation of both veins and arteries. But, even though they affect both, nitrates dilate veins and venules more than they dilate arteries and arterioles.

Moreover, vasodilation of small veins and venules result in peripheral pooling of the blood and decreased return of the venous blood to the heart.

This way nitrates predominantly reduce preload, which is the volume of blood that the heart must eject with each contraction.

On the other hand, vasodilation of small arteries and arterioles lowers the systemic vascular resistance, so nitrates will also reduce afterload, which is the pressure that the heart must work against to eject the blood.

Ultimately, by reducing preload and afterload, nitrates reduce the amount of work the heart has to do, and eventually decreasing the heart’s oxygen consumption; but, at the same time, they increase oxygen delivery to heart tissue by dilating coronary arteries to a small degree.

Nitroglycerin can be administered sublingually, intravenously, or transdermally.

The sublingual form of nitroglycerin has a rapid onset, causing a vasodilatory effect within the first 3 minutes after administration that lasts approximately up to 25 minutes.

This makes sublingual nitroglycerin useful for the treatment and short-term prevention of an acute anginal pain.

In contrast to nitroglycerin, isosorbide dinitrate and isosorbide mononitrate are taken peroral, but they have a longer onset of action of 15-30 minutes and duration of action of 6-10 hours, which makes them useful for the long-term prevention of angina pectoris.

Common side effects of nitrates include flushing, headache, orthostatic hypotension, and reflex tachycardia, which is treated by co-administration of beta blockers.

Interestingly enough, workers in the construction and demolition industries who are regularly exposed to nitroglycerin or isosorbide dinitrate at their job can develop “Monday disease.”

This is characterized by building up tolerance throughout the workweek and then losing that tolerance during the weekend.

When they re-expose themselves to the nitrates the following monday, they experience tachycardia, dizziness, and headaches until they develop tolerance again.

It’s important to note that nitrates are contraindicated in individuals with right ventricular infarction, since they’re very sensitive to changes in the preload, therefore they can easily develop severe hypotension.