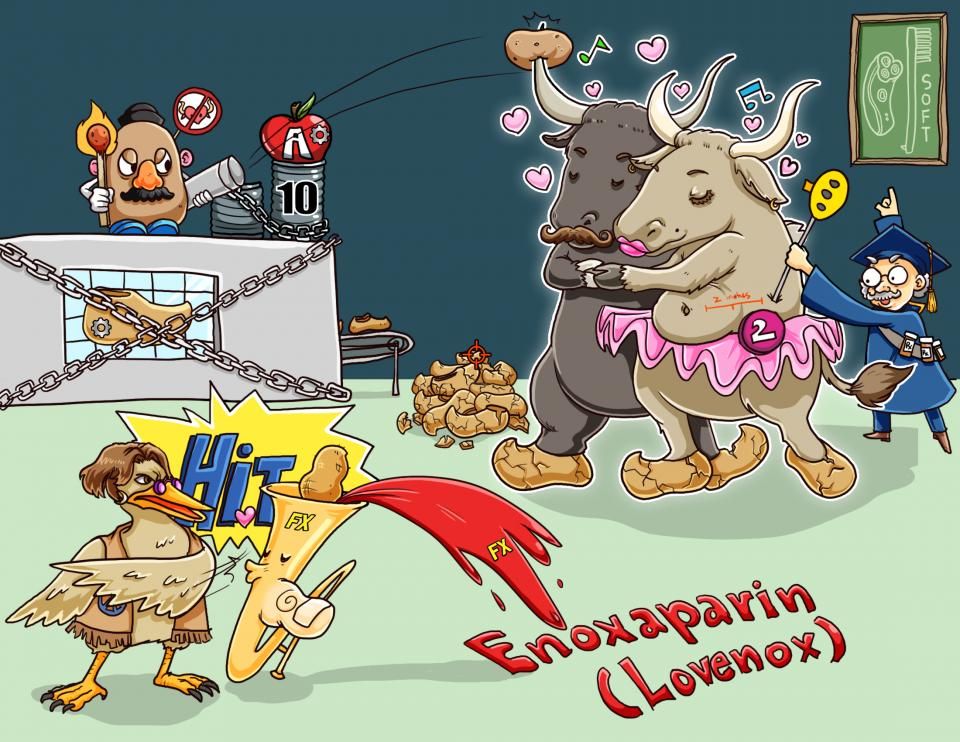 Anticoagulants are medications that work by interfering with the functional clotting factors in the coagulation cascade, and are used to prevent the formation of thrombi, or blood clots, and are used to prevent or treat thromboembolic events, such as deep vein thrombosis, pulmonary embolism, ischemic stroke, transient ischemic attack, coronary artery disease or myocardial infarction.

They're also used in clients with coagulation disorders, including antiphospholipid syndrome and disseminated intravascular coagulation; as well as in clients who underwent cardiac valve replacement or coronary angioplasty; and during surgical procedures like cardiopulmonary bypass, percutaneous coronary intervention, extracorporeal membrane oxygenation, and in clients undergoing dialysis.

Among the most important anticoagulants are heparins. These include unfractionated heparin, which is derived from porcine sources, and can be administered intravenously or subcutaneously; as well as low molecular weight heparins or LMWHs, which are synthetic analogs of certain portions of the heparin molecule. These include enoxaparin, dalteparin, and tinzaparin, and are given subcutaneously.

Once administered, heparins work by binding to and enhancing the activity of antithrombin III, which is an anticoagulant protein synthesized by the liver.

Antithrombin III normally binds to and inhibits Factor Xa and Factor IIa, also known as thrombin, thus making them unavailable to participate in the coagulation cascade. Antithrombin III also inhibits factors VII, IX, XI, and XII, although with much less affinity. Ultimately, heparins stop the formation of the primary clot.

Now, unfractionated heparin is usually used in immediate and short-term anticoagulation because it has a rapid onset of action, usually within seconds, and a short half-life.

Additionally, unfractionated heparin doesn't cross the placental barrier, making it the anticoagulant of choice during pregnancy.

On the other hand, LMWHs have better bioavailability and have a much longer half-life compared to unfractionated heparin.

Now, the main side effect of heparins is undue bleeding, which can present as petechiae, ecchymosis, epistaxis, as well as bleeding gums, blood in stools, hematemesis, and uncontrollable internal bleeding from falls or even minor trauma.

Thankfully, antidotes are available to reverse the action of most anticoagulants if the bleeding gets severe. These include protamine sulfate for unfractionated heparin, which is also effective to a lesser extent on LMWH.

With respect to specific side effects, heparins can cause burning at the injection site, as well as chills, and hyperkalemia due to suppression of aldosterone production.

A unique and serious side effect is heparin-induced thrombocytopenia, or HIT for short. HIT is an immune response in which clients taking heparin produce antibodies that bind to complexes formed by heparin bound to platelets.

As a result, these complexes can either get activated, causing clot formation, or destroyed within the spleen. The end result is a low platelet count and an increased risk of bleeding.

Finally, prolonged use of heparin can cause an increased risk of osteoporosis.

Now, due to the risk of bleeding, heparins are contraindicated in clients with active internal bleeding, recent trauma in the past three months, as well as those with a history of intracranial hemorrhage or ischemic stroke, gastrointestinal ulcers and coagulopathies or bleeding disorders.

In addition, heparins are contraindicated in clients with thrombocytopenia or with a history of HIT, and should be used with caution in clients taking antiplatelet medications like aspirin and clopidogrel; or thrombolytic medications like alteplase, reteplase, and tenecteplase; which can increase the risk of bleeding.

Precaution should also be taken in clients who are allergic to porcine products, as well as in clients with hepatic or renal disease, or alcohol use disorder.

Also, be sure to obtain informed consent from your client when using animal or human derived products, since these products may be contraindicated in clients of certain religious faiths; such as Hindus, Sikhs and Muslims.

Finally, it’s important to note that heparins are the only anticoagulants that are safe for use during pregnancy and breastfeeding.