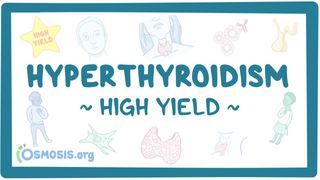 The first one is 55 year old Gregor, who came in complaining about weight loss, heat intolerance, chest pain, palpitations and insomnia.

On the clinical examination, he’s anxious and restless.

He had warm and moist skin, his eyelids were retracted and there was exophthalmos of both eyes and tachycardia.

The other person is 37 year old Josie who migrated to the US from Panama.

She came in with similar symptoms as Gregor but on clinical examination, she also had a goiter.

According to her, she recently had a contrast imaging procedure for a different problem.

TSH and levels of T3 and T4 were taken for both individuals.

Levels of TSH were low, while levels of T3 and T4 were high.

Okay, so both individuals had hyperthyroidism.

TSH stimulates the thyroid gland which is a gland located in the neck.

Once inside the cell T­4 is mostly converted into T3, and it can exert its effect. T3 speeds up the cell’s basal metabolic rate.

Now hyperthyroidism can happen a few different ways and all of them result in too much thyroid hormone and a hypermetabolic state, where cellular reactions are happening faster than normal.

First, hyperthyroidism can be primary, in which case the thyroid gland is the problem and it’s making too many hormones.

There are a few specific diseases associated only with hyperthyroidism but sometimes diseases like thyroiditis, which damages the thyroid and causes hypothyroidism, can cause stored thyroid hormones to leak out, resulting in an initial period of transient hyperthyroidism.

Then there’s secondary hyperthyroidism, where the problem is increased TSH secretion due to a problem with the pituitary gland, like a rare TSH secreting adenoma.

Now, let’s talk about some of the causes of primary hyperthyroidism.

Graves disease is the most common cause of hyperthyroidism, which can sometimes manifests during periods of stress, like during pregnancy.

This is an autoimmune disorder where B cells produce antibodies against several thyroid proteins.

The most high yield autoantibodies you need to remember is thyroid-stimulating immunoglobulins, which are type G immunoglobulins that produce a type II hypersensitivity reaction.

Now, these autoantibodies can also cause Graves ophthalmopathy.

These antibodies activate the T-cells in the retro-orbital space causing them to secrete cytokines like TNF-alpha and IFN-gamma which increase fibroblast secretion of glycosaminoglycans which ultimately increase muscle swelling, muscle inflammation and increase the number of adipocyte count, leading to exophthalmos, which is anterior bulging of the eyes.

Now, thyroid stimulating immunoglobulins also increase the activity of dermal fibroblasts, resulting in pretibial myxedema, with the classical finding of waxy lesions with non-pitting edema that usually appear first on the lower legs.

Interestingly, individuals with Graves disease often have specific HLA genes such as HLA-DR3 and HLA-B8, which are important clues on your exams.

Histology of the thyroid will show tall and crowded follicular epithelial cells with scalloped colloid.

Another cause is toxic multinodular goiter where one or more follicles starts growing bigger and generating lots of thyroid hormones independently of TSH.

A high yield fact is that In about 60% of the cases, this happens due to mutations in the TSH receptors that inappropriately keeps these follicular cells active.

On histology, this appears as focal patches of hyperfunctioning cells with a lot of colloid inside.

Now, nodules that produce a lot of thyroid hormones are called hot nodules because they show increased activity on radioactive iodine uptake tests. They are rarely malignant.

Another high yield concept is the Jod-Basedow phenomenon, or iodine-induced thyrotoxicosis.

The Jod-Basedow phenomenon is hyperthyroidism that happens shortly after administering iodine, even in the form of iodine IV contrast.

The phenomenon does not affect people with normal thyroid function but will affect individuals that’s iodine deficient and have a goiter, or in people with Graves disease, toxic multinodular goiter, or thyroid adenomas.

The key point is that all these disorders have autonomous thyroid tissue that act independently of TSH regulation, so when there’s extra iodine, it provides more material for thyroid hormone production without negative feedback from decreased TSH.

You can think of the Jod-Basedow phenomenon as the opposite of the Wolff-Chaikoff effect where a large increase in iodine actually leads to temporary decrease in thyroid hormone synthesis.