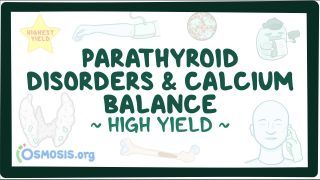 The first person is 47 year old Melania that recently went through a surgical procedure called thyroidectomy due to thyroid cancer.

Melania came in with tetany and on the clinical examination, there was a positive Chvostek’s sign.

The other person is 55 year old Emma, who came in with constipation, muscle weakness and bone pain.

She has a history of kidney stones, specifically calcium stones and she also said that she’s been feeling down lately.

Calcium, phosphate and PTH levels were taken in both individuals.

Both individuals seem to have a problem in their parathyroids.

The 4 parathyroid glands are on the posterior of the thyroid gland, and their main job is to keep blood calcium levels stable.

Changes in the body’s levels of extracellular calcium and phosphate levels are detected by surface receptor in the parathyroid’s chief cells.

Both decreased calcium levels and increased phosphate levels can signal the chief cells to release more parathyroid hormone or PTH.

PTH affect many organs. In the bones it binds to osteoblasts, the bone building cells, and cause them to release RANK ligands, or RANK-L, and monocyte colony-stimulating factor, or M-CSF.

These will cause osteoclast precursors to mature into osteoclasts that break down bones and release calcium and phosphate into the blood.

PTH also gets the kidneys to reabsorb more calcium and excrete more phosphate.

Altogether, these effects help to increase extracellular levels of calcium with they’re low.

Now, let’s talk about hypoparathyroidism, where there’s an abnormality with the parathyroid glands so PTH levels are low.

The most common cause is removal of the parathyroid glands during thyroid or parathyroid surgery.

Another cause is an autoimmune condition that destroys parathyroid glands.

There are also genetic causes like DiGeorge syndrome that causes a variety of immune and birth defects.

With DiGeorge syndrome, the 3rd and 4th pharyngeal pouches don’t develop, so the parathyroid glands and thymus that originate here will be missing in the infant.

Then there is pseudohypoparathyroidism, where PTH levels are normal or high, but the kidneys and bones don’t respond to PTH and this is called PTH resistance.

An example is pseudohypoparathyroidism type 1A, or Albright hereditary osteodystrophy, which is an autosomal-dominant condition.

The cause is a mutation in the Gs protein alpha-subunit and this mutation is inherited from the mother.

Gs proteins function as cellular signaling proteins and where there’s a defect in the alpha-subunit, in this case, the PTH receptor in the bones and kidney won’t be able to activate and so PTH can’t exert its effects.

Now, there’s also pseudo-pseudohypoparathyroidism, which is a subtype of Albright’s hereditary osteodystrophy and it also include symptoms like brachydactyly, developmental delays, and short stature.

However, the gene is passed on by the father instead of the mother and there’s no PTH resistance, so there’s normal PTH and calcium levels.

Now let’s look at the symptoms caused by low levels of parathyroid hormone or the lack of response to them.

Both will lead to hypocalcemia and hyperphosphatemia which results in more excitable neurons. This can lead to tetany, or the involuntary contraction of muscles.

The spontaneous firing of neurons leads to Chvostek's sign, which is when facial muscles twitch after the facial nerve is lightly tapped, usually 1 cm below the zygomatic process.

It can cause Trousseau's sign, which is where a blood pressure cuff applies pressure on the brachial nerve which is enough to make it fire, resulting in a muscle spasm that makes the wrist and metacarpophalangeal joints flex.

If the hypocalcemia and hyperphosphatemia are severe, this can lead to life-threatening complications like severe seizures and cardiac arrhythmias.

Let’s move on and talk about hyperparathyroidism.

Most often, primary hyperparathyroidism is caused by a parathyroid adenoma, a benign tumor.

Rarely, primary hyperparathyroidism is caused by hyperplasia, where parathyroid cells divide excessively causing growth of the glands and in very rare cases, there can be a carcinoma of the parathyroid glands.

The symptoms of primary hyperparathyroidism can be remembered, especially for exams, as ‘stones, thrones, bones, groans, and psychiatric overtones’.

Now, hyperparathyroidism causes hypercalciuria, which can lead to dehydration and can stimulate the formation of calcium based kidney stones and gallstones.

Thrones refers to the toilet to remind you of the polyuria or frequent urination that results from impaired sodium and water reabsorption.

Bones is for bone pain that results after chronic hormone-driven demineralization in order to release calcium.

Groans is for constipation and muscle weakness, both of which are partly due to decreased muscle contractions.

As a result, there are psychiatric overtones which refers to symptoms like depression and confusion.