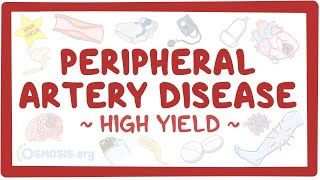 Tariq is a 52-year-old individual who presents to the clinic complaining of left leg pain.

He describes the pain as “cramping” and mostly located in his calf.

He also mentions that the pain comes every time he walks from his home to the supermarket, and is relieved when he rests.

Tariq also has a known history of hypertension, diabetes mellitus, and a myocardial infarction 2 years ago.

On physical examination, there is a noticeable decrease in hair growth on the left side compared to the right, and the skin appears dry and shiny.

There is no leg swelling, and there’s no back pain.

Peripheral artery disease is insufficient tissue perfusion due to narrowing or occlusion of the aorta or one of its peripheral branches supplying the limbs.

Similar to coronary artery and cerebrovascular disease, the development of an atherosclerotic plaque that narrows or completely occludes an artery is the number one cause of peripheral artery disease, and so these diseases often coexist together.

So on the exam, an important clue may be an individual with a past medical history of a myocardial infarction or a stroke.

In addition, look for risk factors of atherosclerosis, such as hypertension, diabetes mellitus, smoking and hyperlipidemia.

The symptoms of peripheral artery disease depend on how bad the occlusion is.

In the early stages of the disease individuals may be completely asymptomatic.

One of the first symptoms is intermittent claudication.

This is characterized by cramping pain in the affected area that comes about during exercise, and is relieved with rest.

Individuals often describe a specific and often consistent distance that brings about the pain, such as walking 2 blocks.

The location of the pain can also help give a clue about which artery is occluded.

In addition to claudication, chronic limb ischemia may produce some physical changes.

This includes a decrease in the skin temperature, called poikilothermia.

Also, hair and nail growth decrease, sensation can be lost.

On physical exam, the pulse distal to the obstruction is weak, and there’s diminished capillary refill in the affected area.

As the arterial narrowing worsens, individuals begin to complain of pain at rest.

This is classically worse at night when the individual is sleeping, and gets better when they stand up or hang their leg off of the bed, due to the effect of gravity on blood flow.

Eventually, the peripheral tissue dies, which manifests as gangrene and ulcers.

The end-stage manifestation is critical limb ischemia, which includes pain at rest as well as tissue loss in the form of gangrenes and ulcers.

Critical limb ischemia is limb-threatening if operative intervention is not performed.

For diagnosis, when there’s suspicion of peripheral artery disease, an ankle-brachial index test, or ABI is performed.

In individuals with intermittent claudication, the ABI usually lies somewhere between 0.4 and 0.9, since the blood pressure in the ankle is decreased.

In severe peripheral artery disease, usually when the individual begins to develop resting pain, the ABI is less than 0.4.

After doing the ABI, the diagnosis is further confirmed with imaging, such as ultrasound or CT angiography.

For treatment, lifestyle changes like exercise programs and diet are the first steps.

For medication, Cilostazol, a phosphodiesterase inhibitor, can directly dilate the arteries, easing symptoms.

In addition it’s an antiplatelet which can prevent platelet aggregation and decrease the risk of thrombosis.

Even without Cilostazol, they should still take an antiplatelet medication like aspirin as prevention for coronary artery disease and stroke.