What Is It, Types, Signs and Symptoms, Diagnosis, Treatment, and More

Nephrolithiasis, also known as kidney stones or renal calculi, refers to the presence of stones within the kidneys. It is one of the most common kidney diseases in adults. Stone formation occurs when there’s an excess of crystal-forming substances that can’t be dissolved in the urine. High urinary excretion of certain substances—for instance, calcium, oxalate, uric acid, and cysteine—can promote stone formation, whereas the excretion of others, such as citrate, has a protective effect. Disturbances in urinary pH, a low urine volume, and a lack of protective substances that prevent the crystals from sticking together may contribute to stone formation. Additionally, environmental factors such as decreased fluid intake, hot climates, and dietary factors play an important role in the development of nephrolithiasis. What does “nephrolithiasis” mean?

The word nephrolithiasis comes from “nephro,” which is the latin word for kidneys, and “lithiasis,” which is the medical term used to refer to stones.

Is nephrolithiasis the same as kidney stones?

The vast majority of kidney stones are made out of calcium salts. Calcium oxalate stones are the most common type, followed by calcium phosphate stones. The main risk factor for developing calcium stones is an increased excretion of calcium (hypercalciuria) and oxalate (hyperoxaluria). These abnormalities can be idiopathic, which means their cause is unknown, or can arise due to other systemic diseases, such as hyperparathyroidism, renal tubular acidosis, and malabsorption.

Citrate has a protective role in stone formation by forming complexes with calcium and inhibiting further aggregation and growth of crystals. For this reason, a low excretion of citrate (hypocitraturia) is associated with an increased risk of developing stones. In most cases, the cause of hypocitraturia is not known. However, it has been associated with the presence of acid-balance disturbances, low levels of potassium in the blood, high-protein diets, and chronic diarrhea.

What are the other types of nephrolithiasis?

Other less frequent types of stones found in the urinary tract can be struvite stones, uric acid stones, cystine stones, or drug-induced stones.

Struvite stones are sometimes referred to as infectious stones, since they can be associated with infections of the urinary tract, especially those caused by urea-splitting organisms (Proteus mirabilis, Klebsiella, Staphylococcus, Xanthomonas, Pseudomonas, and Mycoplasma). These bacteria split urea molecules into ammonium and CO2, thereby raising the urine’s pH to neutral or alkaline values, and ultimately leading to the precipitation of solutes, to which the bacteria can adhere.

Moreover, other types of stones can become infected by urea-splitting organisms, leading to secondary struvite stone formation. Struvite stones are more common in biologically-female individuals; they tend to grow large, filling part of the renal pelvis and calyces, and adopting a staghorn shape. In the urine, they can be seen as “coffin-lid” shaped crystals. After their removal, if infected fragments of the stone are left behind in the kidney, they can often grow back, causing a persistent urinary tract infection and decreased renal function.

Uric acid stones generally develop due to increased excretion of uric acid (hyperuricosuria) and low urine pH. Risk factors include high-protein diets, gout, inflammatory bowel disease, genetic diseases, and diabetes. Uric acid stones are one of the few kidney stones that can be managed successfully through medical treatment that consists of adequate hydration and supplements to raise the urine’s pH.

Cystine stones are generally caused by cystinuria, a hereditary disease that causes increased excretion of cystine in the urine, as well as low urinary pH. Cystine stones are very hard and can be seen as thin hexagonal crystals in a urine analysis.

Finally, drug-induced stones can develop by two mechanisms. In some cases, excessive use of laxatives or diuretics can contribute to metabolic abnormalities that ultimately lead to stone formation. On the other hand, certain medications, such as indinavir or ciprofloxacin, can crystallize in the urine and create stones.

What are the signs and symptoms of nephrolithiasis?

The symptoms of nephrolithiasis depend on their size, shape, and location on the urinary tract. Initially, the stones are lodged in the renal pelvis, where they can be asymptomatic and don’t cause any pain or obstruction of the urine flow.

Kidney stones might move from the kidney into the ureter, which is a narrow tube that connects the kidneys to the bladder. The passage of the ureteral stone causes increased pressure inside the ureter, followed by spasms of the smooth muscle lining and distension of the walls. This typically presents as a renal colic, with severe flank pain of sudden onset that can irradiate to the inner thigh or the groin. Due to the intense pain, people may find themselves feeling restless or unable to find a comfortable position. Some individuals may even show signs of sweating, or have nausea and vomiting as a physiological response to the intense pain. In addition, as the stone moves down, it can damage the ureter, causing bloody urine (hematuria).

When stones reach the bladder, they can irritate and obstruct the bladder, leading to frequent or painful urination. Ultimately, small stones may spontaneously be eliminated through urine, relieving the pain. If the obstruction isn’t resolved, it can lead to severe complications, including chronic bladder discomfort, hydronephrosis, and a decrease in renal function due to urine build up. Additionally, the obstructed kidney can become infected, causing obstructive pyelonephritis, a life-threatening condition that requires urgent surgery to drain the kidney, as well as intravenous antibiotics.

How is nephrolithiasis diagnosed?

Asymptomatic nephrolithiasis may be detected as an incidental finding on imaging techniques or on urinalysis for hematuria.

On the other hand, symptomatic individuals are first assessed through physical examination. A common sign in people with kidney infection or kidney stones is Giordano’s sign, which refers to tenderness upon percussion to the costovertebral angle, formed by the angle between the 12th rib and the lumbar spine.

Next, kidney stones can be identified through imaging techniques, such as X-rays and non-contrast CT scans. The majority of calcium stones are visible on an abdominal X-ray, while some stones such as uric acid and cystine stones are radiolucent, meaning that they can’t be seen on an X-ray due to their composition. A non-contrast CT scan, however, is able to detect most stones, regardless of their size and composition, and can also help determine the type of stone by looking at its density.

An ultrasound is an alternative imaging technique that doesn’t require radiation, and thus can be used to assess nephrolithiasis in vulnerable individuals like children or pregnant people. The presence of stones can be seen directly as a dense line with distal shadowing on the kidney or ureter, as well as indirectly by evaluating the dilation of the kidneys (hydronephrosis). For pregnant people with a high clinical suspicion and a negative ultrasound, an MRI can be used to identify kidney stones.

Once an acute episode has subsided, a metabolic evaluation can be recommended, especially for individuals with recurrent episodes of nephrolithiasis. A metabolic evaluation generally includes assessing the characteristics of a 24-hour urine sample and, when possible, analyzing the stone crystals found in the urine. Additionally, blood tests may be performed to detect metabolic abnormalities, such as high calcium and uric acid levels in the blood.

How is nephrolithiasis treated?

To treat nephrolithiasis, the first step is pain control. This may include non steroidal antiinflammatory drugs (NSAIDs) to reduce the inflammation and ureteral spasms, intravenous fluids, and medications to help with nausea and vomiting. Individuals with persistent pain despite treatment can be given opioid medications.

Subsequent treatment depends on the size, composition, and location of the stone, as well as the presence of complications.

For small stones (< 1 cm) without complications and effective pain treatment, expectant management (i.e. waiting for the stone to pass spontaneously) is appropriate. Most stones will pass over the course of four weeks. Some cases may be treated with medical expulsive therapy (MET), in which medication such as tamsulosin is given to relax the ureteral smooth muscle and help the stone pass more easily.

Larger stones or those that are not able to pass despite MET should be considered for lithotripsy or surgical intervention, while urgent surgery may be required if there’s severe obstruction or infection of the urinary tract, decrease in renal function, uncontrollable pain, or renal obstruction in individuals with a solitary kidney.

Lithotripsy, also known as extracorporeal shock wave lithotripsy (ESWL), is a non-invasive procedure that uses shock waves to fragment the stone, breaking it into smaller pieces that are excreted in the urine. Shock waves can only fragment low density stones, so hard stones like cysteine or calcium oxalate can’t be treated with lithotripsy.

When lithotripsy isn’t possible, surgical removal of the stones is the preferred treatment. Stones can be removed either by ureteral endoscopy or through minimally-invasive surgery, as in percutaneous nephrolithotomy (PCNL). PCNL may be necessary for large stones (> 2 cm) or those that can’t be removed endoscopically because of their shape, such as staghorn stones.

In rare cases in which stones are unable to be removed by endoscopy or minimally-invasive surgery, open surgery such as ureterolithotomy or nephrolithotomy may be necessary.

Finally, many people that develop nephrolithiasis are at risk for future recurrence. Because of that, general dietary modifications such as increased fluid intake and decreased sodium and protein consumption may be recommended to prevent future stone formation. Additionally, individuals who develop hypocitraturic or uric acid stones may be recommended supplements to raise the urine’s pH, such as potassium citrate or bicarbonate. In individuals with struvite or infectious stones, removal of the stone should be followed by antibiotic treatment to eliminate the presence of urea-splitting organisms.

What are the most important facts to know about nephrolithiasis?

Nephrolithiasis refers to the presence of stones within the kidneys. Calcium oxalate stones are the most common type, followed by calcium phosphate, struvite, and uric acid stones. Risk factors for stone formation include low urine volume, increased excretion of solutes, and pH disturbances. Kidney stones can be asymptomatic for a long time. When the stones pass from the kidney into the ureter, the most common clinical presentation is a renal colic, which can be accompanied by nausea, vomiting, and hematuria. For diagnosis, symptomatic individuals are first assessed through physical examination, followed by imaging techniques, such as X-rays, non-contrast CT scan, and ultrasound. Most cases can be treated with pain medications and expectant management (waiting for the stone to pass spontaneously). Larger stones, or those that are not able to pass spontaneously, usually require stone removal with extracorporeal lithotripsy, endoscopy, or surgery. After the first episode, many people will have a recurrence. Because of that, lifestyle modifications such as increased fluid intake and dietary changes might be recommended.

Quiz yourself on Nephrolithiasis 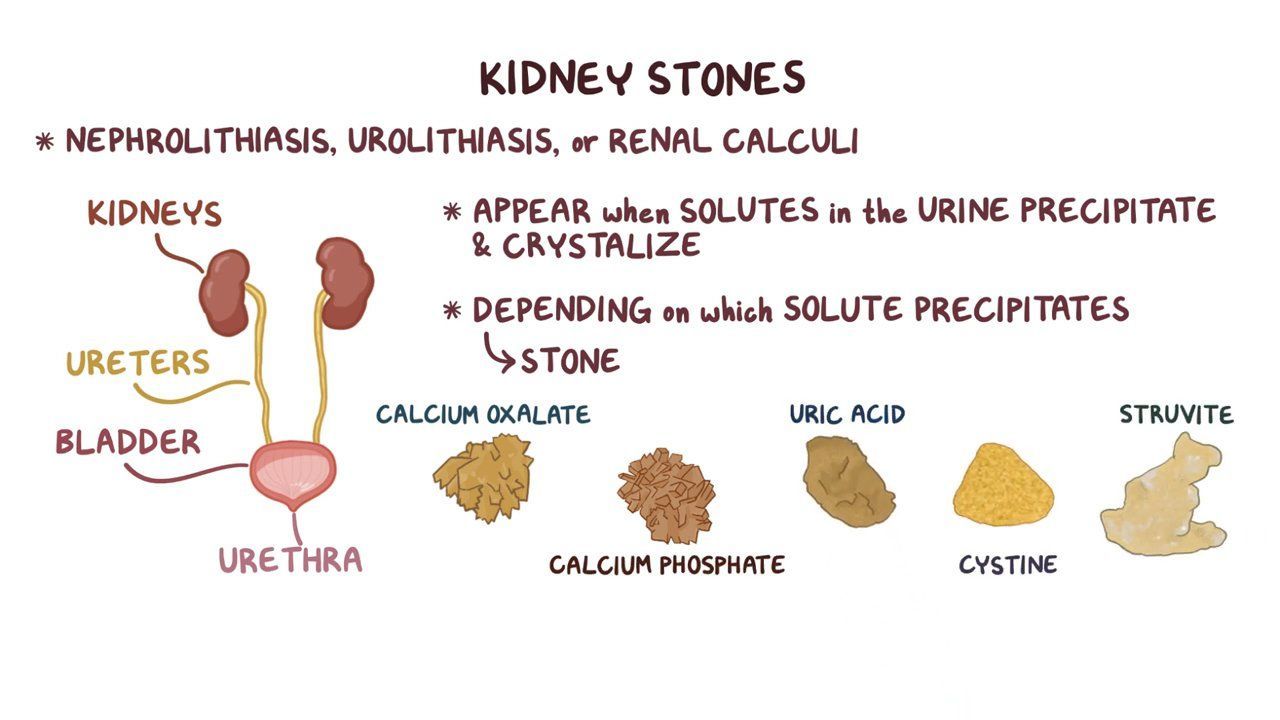 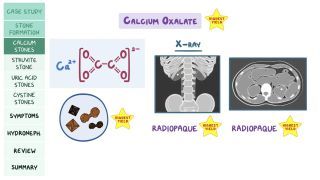 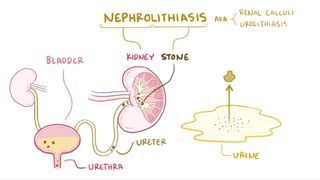 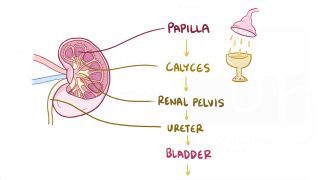 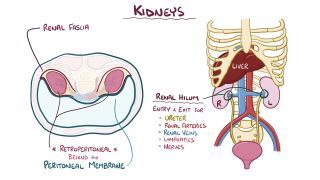