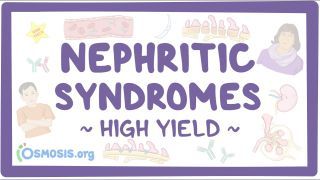 On the nephrology ward, two people came in with the same symptoms: peripheral and periorbital edema, along with cola-colored urine, arterial hypertension and decreased urine output.

The first person is 10 year old Timmy who had a throat infection two weeks ago.

The second one is 45 year old Dorothy, who also presents with hemoptysis.

Lab tests show that both of them have increased creatinine and BUN.

On urinalysis, there’s hematuria and red blood cell casts in the urine.

A 24-hour protein collection was done and showed that both Timmy and Dorothy had proteinuria, but in both cases it was less than 3.5 grams per day.

Now, both Timmy and Dorothy have nephritic syndrome.

Nephritic syndrome is typically caused by inflammation that damages the glomerular basement membrane, leading to hematuria and red blood cell casts in the urine.

Eventually, this damage can lead to renal failure, where the individual can present with oliguria, arterial hypertension, due to sodium retention, and peripheral and periorbital edema.

Lab tests show high levels of BUN and creatinine and on urinalysis, there’s hematuria, proteinuria and RBC casts in the urine.

A 24-hour protein collection is necessary to quantify how many proteins are lost through urine.

Now, nephritic syndrome can be differentiated from nephrotic syndrome because the proteinuria is generally under 3.5 grams per day, or within the “subnephrotic range”.

In severe cases though, proteinuria can reach over 3.5 grams per day.

In order to determine the cause, a careful history and a kidney biopsy can help diagnose the particular disease.

Okay, let’s start talking about the different disorders that could cause nephritic syndrome.

For the diseases that are only caused by a type III hypersensitivity reaction, let’s start with acute poststreptococcal glomerulonephritis or PSGN, which is most frequently seen in children, a very high yield fact.

Poststreptococcal glomerulonephritis can happen 2 to 4 weeks after a group A streptococcal infection of the pharynx or the skin, like impetigo.

Some group A streptococci strains carry the M-protein virulence factor, which initiates a type III hypersensitivity reaction where antibodies, often IgG and IgM, form immune complexes with the bacterial antigen.

These immune complexes travel to the glomerulus through the blood and deposit in the glomerular basement membrane or GBM.

Most of the time they’re subepithelial, meaning between the podocytes and the basement membrane.

The immune complexes initiate an inflammatory reaction in the glomerulus, which involves activation and deposition of C3 complement, inflammatory cytokines, oxidants, and proteases that damage the podocytes.

For your test, remember that lab tests show low levels of C3 in the blood and strep titers and serologies are positive.

Although a kidney biopsy isn’t always necessary, when it’s done, it can provide some specific clues.

On light microscopy, the glomeruli are enlarged and hypercellular.

On immunofluorescence, there are IgG, IgM and C3 deposits along the glomerular basement membrane and the mesangium, which create a specific “starry sky” appearance.

On electron microscopy, there are subepithelial deposits which appear as “humps”.

PSGN usually resolves on its own in children, but in adults, it can sometimes lead to renal failure, so another high-yield fact is that age affects prognosis.

Next on the list is IgA nephropathy, formerly called Berger’s disease .

This happens when abnormal IgA form in the body and the immune system recognizes them as foreign.

In response, the body generates IgG antibodies that target these IgAs, forming immune complexes which travel through the bloodstream and then get trapped in the kidney.

The immune complexes specifically deposit in the mesangium which is the tissue in the Bowman’s capsule that offers structural support to the glomerular capillaries.

The IgA-IgG immune complexes activate the alternative complement pathway, leading to the release of proinflammatory cytokines and migration of macrophages into the kidney, all of which contributes to glomerular injury.

What’s absolutely important to remember for your tests is that IgA antibodies are mainly secreted by the mucosal tissues of the respiratory and GI tract, so a high yield fact is that IgA nephropathy usually accompanies a respiratory or a GI infection.

Okay, now your test might try to confuse you by presenting a similar disorder called IgA vasculitis, also known as Henoch-Schonlein purpura.

Remember, the difference is IgA nephropathy only affects the kidneys, while IgA vasculitis can cause nephritic or nephrotic syndrome, but it also presents with colicky abdominal pain, bloody stool, arthritis, and palpable skin lesions.

Let’s move on to Diffuse proliferative glomerulonephritis, which is often caused by systemic lupus erythematosus.

Lupus is an autoimmune condition that affects multiple organs, including the kidneys.

This is another example of type III hypersensitivity reaction, where immune complexes are formed and deposited in various parts of the body.

Once they reach the kidney, they initiate an inflammatory reaction that leads to nephritic syndrome.

Lupus nephritis is classified depending on the exact site of these immune complexes and subsequent inflammatory reaction.

With diffuse proliferative glomerulonephritis, diffuse means that more than 50% of the glomeruli in both kidneys are affected.

The most common site of deposition is in the subendothelial space, meaning between the endothelial wall and the glomerular basement membrane.

On light microscopy, the immune complexes create an overall thickening of the capillary wall, which gives a “wire loop” appearance.

On immunofluorescence, there are granular immune complexes.

On electron microscopy, you can see sub-endothelial immune complexes.

Next we’ll talk more complex conditions that could have multiple causes.

There are actually three types of MPGN, but they all cause proliferation of mesangial and endothelial cells in the glomerulus.

We’ll only go through the first two, since the third type isn’t well understood.

Type I MPGN is the most common form, and it can be idiopathic or secondary to hepatitis B or hepatitis C infection.

Type I MPGN usually starts one of two ways.

The first way is through type III hypersensitivity reaction where there are circulating immune complexes made from antibodies bound to antigens released from hepatitis B or hepatitis C, infections, and this is another very high yield fact!

Over time, many of these immune complexes that circulate in the body reach the glomerulus and activate the complement system through the classical pathway, also causing complement deposition.

These immune complexes end up in the subendothelium, meaning between the endothelial wall and the glomerular basement membrane.

The second way is not caused by a hypersensitivity reaction, but it involves the inappropriate activation of the alternative pathway of the complement system.

With this pathway, C3 is converted to C3a and C3b by an enzyme called C3 convertase.

Inappropriate activation of this enzyme could be caused by a genetic mutation, or a special IgG autoantibody, called “nephritic factor” or C3NeF.

This IgG binds to the C3 convertase, stabilising it and allows it to continue working.

This “long-life” C3 convertase keeps on converting C3 to C3a and C3b.