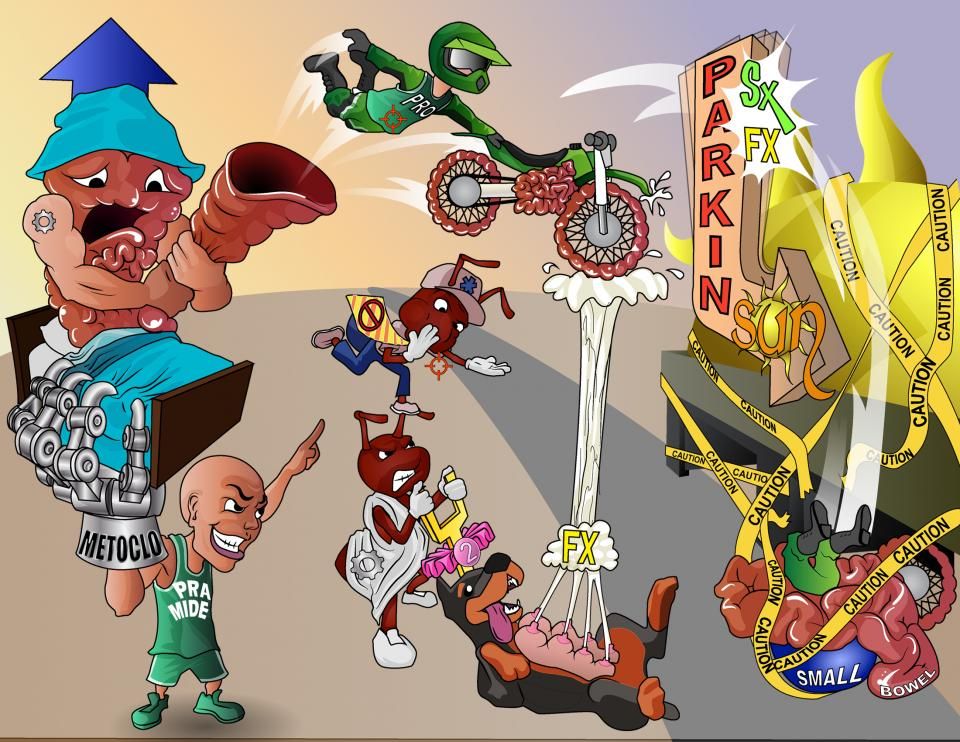 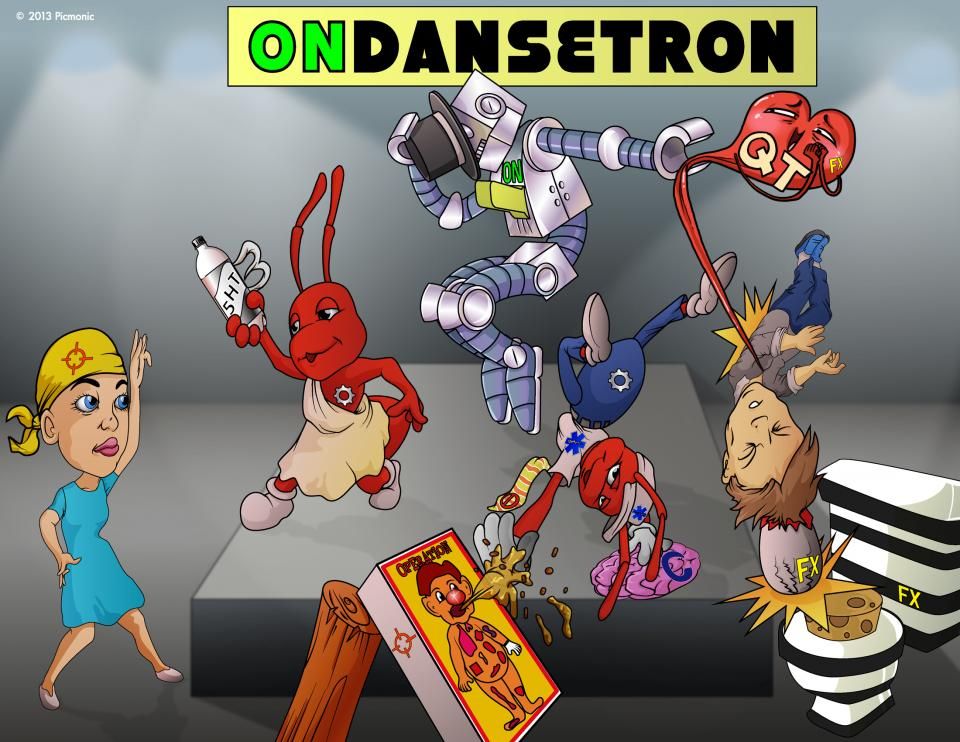 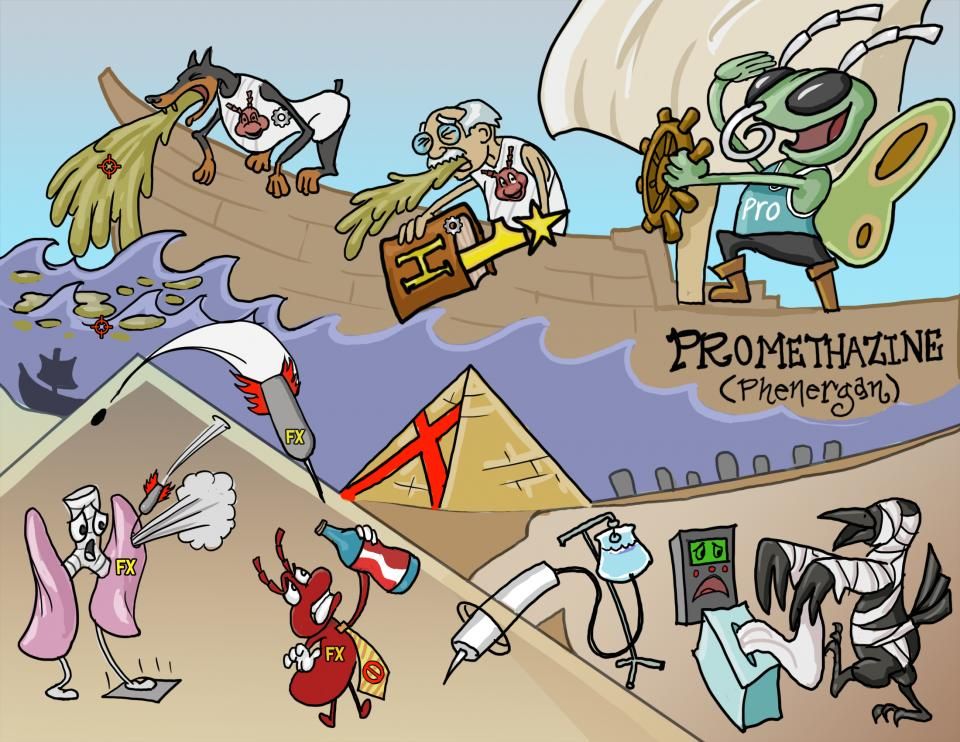 Antiemetics are a group of medications that are used to treat nausea and vomiting. These include ondansetron, metoclopramide, aprepitant, prochlorperazine, and promethazine, as well as antihistamines like diphenhydramine, and cannabinoids, such as dronabinol.

Let’s start with ondansetron, which can be administered orally, intravenously, and intramuscularly. Once administered, ondansetron acts as a 5-HT3 receptor antagonist peripherally by decreasing vagal nerve stimulation, but it is also a very powerful central acting antiemetic blocking an area in the brain called chemoreceptor trigger zone, or CTZ for short.

Ondansetron is primarily used to control nausea and vomiting after surgical anesthesia, as well in individuals undergoing chemotherapy or radiotherapy.

Next, metoclopramide can be administered orally, intranasally, intravenously, and intramuscularly, and subcutaneously. Once administered, it acts by blocking dopamine receptors in the CTZ.

Okay, another antiemetic is aprepitant, which can be given orally, as well as intravenously in the form of fosaprepitant. Once administered, it acts as a neurokinin receptor antagonist that blocks neurokinin-1, or NK-1, receptors in the CTZ, and thus, it can be used to prevent chemotherapy-induced nausea and vomiting.

Alright, moving onto prochlorperazine, which is a phenothiazine, and can be given orally, rectally, intravenously, and intramuscularly. Phenothiazines block dopamine receptors in the CNS and they’re mostly used as antipsychotics.

They’re primarily due to the blockage of D2 receptors in the CTZ, as well as due to anticholinergic and antihistamine effects. Prochlorperazine is mainly used to treat nausea and vomiting associated with motion sickness.

Finally, there’s dronabinol, which is the pharmaceutical form of cannabinoid that can be administered orally. Dronabinol activates cannabinoid receptors in the brain, which seems to cause appetite stimulation and antiemetic effects, and can be used to treat clients who experience chemotherapy-induced nausea and vomiting.

Alright, now moving onto side effects. Ondansetron can cause headaches, gastrointestinal disturbances like constipation, and can prolong the QT interval, leading to arrhythmias.

A life-threatening side effect of ondansetron is serotonin syndrome, which is caused by serotonin accumulation that results in overstimulation of the nervous system.

This syndrome is characterized by skin flushing, muscle rigidity, hyperthermia, agitation, seizure, and coma. It can occur in clients treated with a combination of ondansetron and other medications that increase serotonin level, such as antidepressants.

On the other hand, in males, metoclopramide can cause gynecomastia and erectile dysfunction. Decreasing the effects of dopamine can also lead to the development of extrapyramidal symptoms within the first few days of treatment, such as acute dystonia and pseudoparkinsonism.

Similarly, prochlorperazine can decrease dopamine effects, leading to hyperprolactinemia and parkinsonism. In addition, it can result in anticholinergic side effects, such as dry mouth, blurred vision, tachycardia, urinary retention, and constipation.

Finally, prochlorperazine can also cause extrapyramidal symptoms, and may have antihistamine effects, which can lead to sedation.

On the other hand, aprepitant may cause side effects like headaches, dizziness, fatigue, and hiccups! Other common side effects may include anorexia, nausea, vomiting, heartburn, and constipation.

Finally, less common but still important side effects of aprepitant include hair loss and a skin rash, as well as blood disorders like neutropenia.

Finally, dronabinol can cause side effects from cannabinoids. These include drowsiness, dizziness, confusion, delusions, anxiety, and euphoria. In addition, dronabinol can also increase appetite and cause gastrointestinal disturbances, such as abdominal pain.

As far as contraindications go, ondansetron should be avoided in clients with risk factors for QT prolongation or in combination with other medications that increase serotonin levels, and should be used with caution in clients with electrolyte abnormalities.

On the other hand, metoclopramide is contraindicated in clients with Parkinson’s disease, as well as in those with mechanical bowel obstruction or perforation.

Additionally, as a boxed warning, metoclopramide should not be used for more than 12 weeks, as it may cause tardive dyskinesia, which can be irreversible.

Aprepitant should be used with caution in clients with severe hepatic disease, as well as those who also take warfarin. Finally, prochlorperazine has a boxed warning, contraindicating it for elderly clients with dementia-related psychosis.