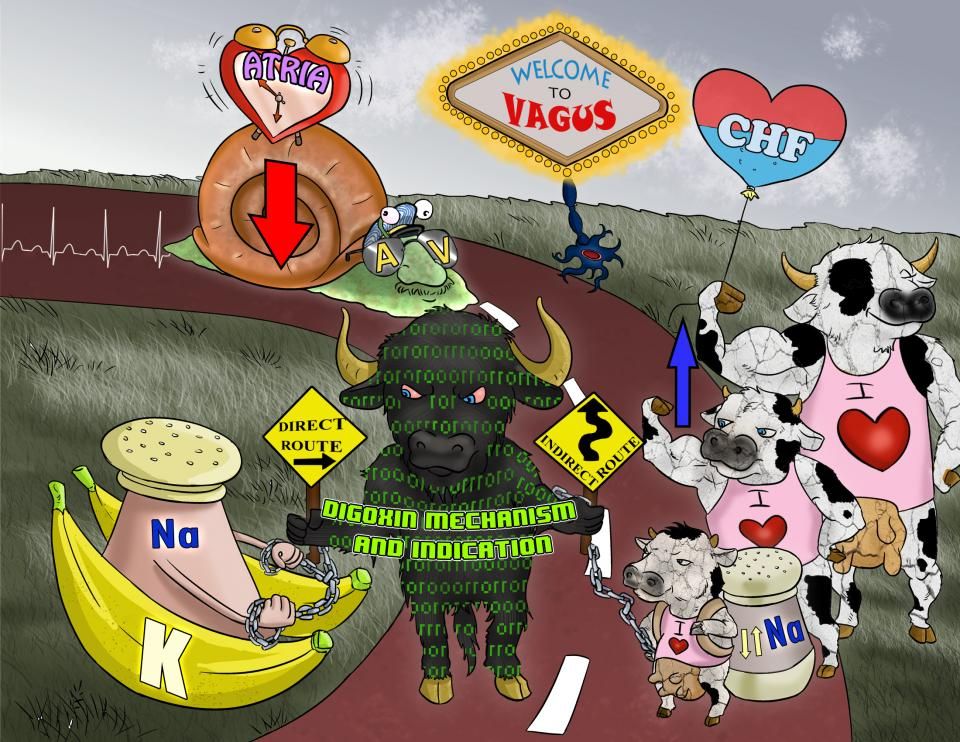 Cardiac glycosides, also called digitalis glycosides, are medications derived from the foxglove plant, Digitalis purpurea. They are commonly used for the treatment of atrial arrhythmias, such as atrial flutter and atrial fibrillation, which are caused by rapid, uncoordinated contractions of the atria. In addition, cardiac glycosides can be prescribed for congestive heart failure when other medications fail.

Now, the most commonly used cardiac glycoside is digoxin, which can be given orally, intravenously, and intramuscularly. Once administered, digoxin works by reversibly inhibiting the sodium-potassium ATPase located in the cell membrane of cardiomyocytes.

Normally the sodium-potassium ATPase pumps three sodium ions out of the cell for every two potassium ions that it pumps in, and to do this, it consumes one ATP molecule for energy.

When the sodium-potassium ATPase is inhibited by digoxin, sodium builds up inside the cell. This interrupts the sodium-calcium exchanger on the cell membrane, which normally pumps one calcium ion out in exchange for three sodium ions.

As a result, digoxin causes calcium to build up within cardiomyocytes, allowing the cardiac muscle fibers to contract more efficiently, which leads to an increase in the force of the heart’s contractions and cardiac output. In turn, the increase in cardiac output increases the renal blood flow and urine output, which also helps reduce peripheral edema.

Digoxin also stimulates the vagus nerve, which provides the parasympathetic supply to the heart, and reduces the conduction velocity through the AV node. These two effects combined result in a decreased heart rate. But because parasympathetic innervation is much richer in the atria, these effects mainly involve the atria.

Now, a major drawback is that digoxin has a very narrow therapeutic window, which means that small variations in its blood concentration can easily cause toxicity. Some common side effects of digoxin that can indicate toxicity include gastrointestinal disturbances, such as anorexia, nausea, vomiting, and rarely diarrhea.

In addition, due to vagus nerve stimulation, digoxin can result in conduction defects like bradycardia and even heart block. Additionally, the increased intracellular calcium may predispose clients to arrhythmias.

Other side effects include neurologic symptoms, such as confusion, disorientation, and visual disturbances like diplopia, blurred vision, or xanthopsia, which is when things appear yellow. Some clients may also develop a bullous, erythematous maculopapular rash.

Finally, in acute digoxin toxicity, too many sodium-potassium ATPases are inhibited at the same time, which can result dangerously in hyperkalemia; treatment involves slowly going back to normal potassium levels, as well as administration of digoxin-specific antibody fragments or digoxin immune Fab, which binds to and inactivates digoxin.

Now, digoxin should be used with caution in certain conditions that may predispose to digoxin toxicity. These include electrolyte abnormalities like hypokalemia, hypomagnesemia, and hypercalcemia, all of which increase the binding of digoxin to the cell; as well as renal dysfunction, since digoxin is excreted through the kidneys.

The risk of toxicity is also increased by medications that compete with digoxin for the binding site or inhibit its renal clearance, such as amiodarone, verapamil, diltiazem, and quinidine.

Finally, digoxin is contraindicated in clients with heart blocks, which could be worsened; ventricular arrhythmia, which can be treated with medications that are more effective and safer than digoxin; and myocardial infarction, where the increase in contractility could damage the infarcted myocardium.

Alright, when a client with heart failure is prescribed digoxin, perform a baseline assessment, including weight, vital signs, and heart and lung sounds. Then, assess the location and extent of any edema that’s present.