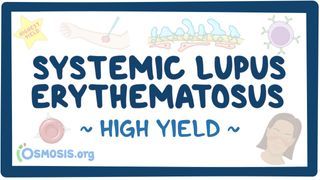 At the internal medicine department, a 42 year old female named Mary shows up.

She complains of multiple skin lesions on the arms, chest and back.

She reports having these lesions for about 3 months.

In the past, she had similar lesions.

She reports morning stiffness involving her fingers and knees, as well as a history of multiple miscarriages.

She was positive for ANA and antiphospholipid antibodies.

Meanwhile, at the emergency department, a 25 year old man named Kyle shows up with flank pain and hematuria.

He has a history of migratory arthralgias and photosensitivity.

He was positive for ANA and double-stranded DNA antibodies, and also had low complement levels.

This is a systemic, relapsing, and remitting autoimmune disease, where systemic means that essentially any tissue or organ can undergo inflammation; while relapsing and remitting, stands for periods of illness, called relapses or flares; and periods of remission during which there are few or no symptoms.

Now, lupus develops when the person’s immune system starts recognizing nuclear antigens of the body’s own cells as foreign and tries to attack them.

Essentially, B cells start producing antibodies which bind to nuclear antigens in our own cells.

Normally these B cells are destroyed before they fully mature in a process called self tolerance, but in people with lupus this process is impaired.

The antibodies released by these B cells form antigen-antibody complexes and these complexes drift around in the blood until they deposit or stick to the vessel wall in all sorts of different organs and tissues like the kidneys, skin, joints, heart.

Deposited complexes then initiate a local inflammatory reaction, which causes damage through the activation of the complement system, which, after a huge cascade of enzyme activation, causes the cell to burst and die.

Eventually, this gets complement factors like C3 and C4 all used up.

A very high yield fact to remember is that this is a kind of type III hypersensitivity reaction.

Another high-yield fact is that because early complement proteins like C1q, C2 and C4 are all involved in removing those antigen-antibody complexes, individuals that lack any of these proteins are more likely to experience lupus.

This is considered a type II hypersensitivity reaction.

Okay, the classic scenario involves a female of reproductive age, especially of African-American or Hispanic descent.

There are 11 key symptoms and findings you need to remember for lupus and we can divide them into 4 groups.

The first group are 3 symptoms that have to do with the skin.

Second is a discoid rash, which is chronic erythematous rash in sun-exposed areas like the arms and legs that are plaque-like or patchy redness that’s scaly and can cause severe scarring or hair loss.

Third, is a general photosensitivity of the skin, essentially a catch-all category for other rashes that happen to sun-exposed areas, typically only lasting a couple of days.

The next group involves 2 symptoms affecting the membranes.

Lupus can also damage the inner membrane or mucosa of various tissues, causing ulcers in the mouth or nose.

Next, there’s serositis which is inflammation of the serosa, which is like the outer membrane of an organ or tissue.

What makes these vegetations special is that they can be present on either surface of the valve, but are usually on undersurface.

First up is and two or more joints have to be inflamed.

The next one is evidence of kidney damage based on protein or cells in the urine.

The test question might show you or describe a light microscopy image with diffuse thickening of the glomerular capillary walls with characteristic "wire-loop" structures.

A high yield fact to remember is the end stage kidney failure is the number one cause of morbidity and mortality among individuals with lupus, followed by infections and cardiovascular disease.

The final three are lab findings related to blood.

One of these is having autoantibodies against blood components causing cell destruction, and leading to conditions like anemia, thrombocytopenia, or leukopenia; while the tenth and eleventh findings have to do with having specific antibodies in the blood.

The next one is having positive serology for antinuclear antibody or ANA, which targets nuclear antigens.