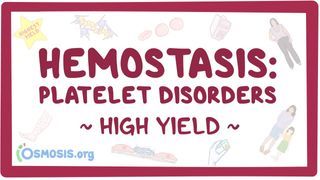 At the family medicine center, a mother came in with her 5 year old child, Alana.

Several days ago, Alana developed bloody diarrhea after eating undercooked ground beef and her mother noticed her face was pale and she only urinated once in the past 12 hours.

Next to her, there’s a 30 year old person named Danika, who came in complaining of increased bruising for the past several months.

She has no other symptoms and physical examination shows multiple ecchymoses on the extremities.

Both Alana and Danika are suffering from a hemostasis disorder.

The first includes problems with primary hemostasis, which is when there’s a problem forming the initial platelet plug, and so, they’re referred to as platelet disorders.

For this video, let’s focus on the platelet disorders.

These can be further subdivided into two categories. In the first category, there’s thrombocytopenia, which is defined as a platelet count below 150,000 per microliter, with the normal range being between 150,000 and 450,000.

Other cases can be non-immune mediated, like thrombotic thrombocytopenic purpura, or TTP, and hemolytic-uremic syndrome, or HUS.

Thrombocytopenia from these cases is often due to an increased consumption of platelets during the formation of abnormal clots.

And as a result, there are fewer platelets left in circulation.

Alright, now, in the second category of platelet disorders, there’s a decrease in platelet function, while the platelet count can be normal, like in Glanzmann thrombasthenia, Bernard-Soulier syndrome, and uremic platelet dysfunction.

Okay, so let’s take a closer look at these different platelet disorders, starting with the immune-mediated causes of platelet destruction.

First, there’s heparin induced thrombocytopenia, or HIT, which is a reaction that develops 5 to 15 days after starting either unfractionated or low-molecular weight heparin.

Remember for your exams that the risk for HIT is greater with unfractionated heparin.

HIT is caused by an IgG antibody that binds to an antigen complex made of heparin and the endogenous cytokine platelet factor 4.

The antibody then binds to and activates platelets, causing them to get used up when they form numerous blood clots.

Alright, next we have immune thrombocytopenic purpura, or ITP. ITP is caused by autoantibodies that bind to the platelet receptor GpIIbIIIa, and target platelets for destruction in the spleen.

It’s like the platelet equivalent of autoimmune hemolytic anemia, where antibodies and complement are directed against RBCs, targeting them for destruction.

In fact, some patients develop both conditions together and that’s called Evan’s syndrome.

When ITP occurs by itself, it’s called primary ITP, but when it’s triggered by another condition like hepatitis C, HIV, or lupus - it’s called secondary ITP.

In thrombotic thrombocytopenic purpura, or TTP, there can be a genetic deficiency of ADAMTS-13, or an autoantibody against ADAMTS-13.

Sometimes autoantibodies to ADAMTS-13 develop after exposure to antiplatelet medications like ticlopidine and clopidogrel, or chemotherapeutic agents like cyclosporine and gemcitabine.

Alternatively, they can be associated with diseases like systemic lupus erythematosus.

Alright, now HUS is clinically similar to TTP, and there are two types of HUS; typical and atypical. The typical type is also called shiga-toxin producing Escherichia coli HUS, or SPEC-HUS.

It classically occurs in children and develops after an episode of gastroenteritis caused by shiga toxin producing organisms, like enterohemorrhagic Escherichia coli subtype O157:H7 and Shigella dysenteriae.

It then enters the circulation, where it damages the endothelial cells, triggering a massive release of von willebrand factor.

This leads to excessive platelet adhesion, and clot formation throughout the body.

On the other hand, atypical HUS is not associated with shiga-toxin producing Escherichia coli, may occur at any age, and has a relatively poor prognosis.

Atypical HUS is linked to a genetic mutation in factor H, a protein that normally controls the complement system.

And it’s caused by a deficiency in the platelet receptor GpIIbIIIa, which is necessary for platelets to stick to each other via fibrin.

So even though the platelet count can be normal, there’s diminished platelet aggregation.

Moving on, Bernard-Soulier is a rare autosomal recessive disorder caused by a deficiency or absence of the platelet receptor GpIb.

GpIb normally binds to von Willebrand factor which it self is bound to the collagen exposed in the damaged endothelial lining.

So here, platelets can’t adhere to the damaged blood vessels and they won’t activate the platelet plug formation process.

The pathophysiology isn’t fully understood, but it’s thought that there’s an accumulation of toxins which interferes with the normal platelets - endothelium interaction.

Whatever the cause, platelet problems, or primary hemostatic disorders, usually present with petechiae, which are pinpoint superficial skin bleeds, anterior epistaxis, which are usually mild nosebleeds, immediate bleeding after surgical procedures, like tooth extraction, or bleeding from mucosal surfaces, like gingival, gastrointestinal, or vaginal bleeding.

Now, when there’s thrombocytopenia like in ITP, the lower the platelet count, the higher the risk of bleeding or bruising.

Alright, but other symptoms can help you identify the specific disease.

Let’s start with HIT, which is the most common cause of thrombocytopenia in hospitalized individuals.

For your exams, it’s important to know that individuals with HIT more often develop paradoxical thrombotic events, rather than bleeding.

Other individuals simply have thrombocytopenia on a CBC.