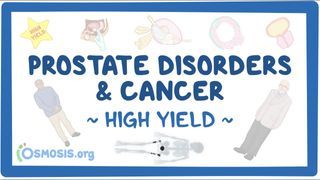 On the Urology ward, two people came in.

The first is 63-year-old Joseph who complains of difficulty with urination.

More specifically, he says he has trouble initiating his stream of urine, and after urination, his bladder still feels full.

He also wakes up several times each night feeling the need to urinate.

These symptoms have been present for the past few years, but have gradually become worse.

The second is Sam, a 72-year-old African-American individual who comes in with lower back pain that is not relieved by rest or position changes and has been increasing over the past couple of months.

He has also noticed recent feelings of fatigue and weight loss, which he attributes to decreased appetite.

On further history, he consumes a diet low in fiber and high in saturated fat and red meat.

On digital rectal examination, an irregular, hard lump is palpated in the posterior of his prostate.

Both Joseph and Sam have different forms of prostate disorders!

The prostate is a small gland whose job is to secrete an alkaline milky liquid that joins the sperm and the semen . To do that, it sits under the bladder and in front of the rectum.

That’s important because when we do digital rectal exam, we’re able to palpate the posterior of the prostate.

The urethra goes through the prostate before reaching the penis.

Now, the prostate can be divided into a few zones and this is high yield!

The peripheral zone, which is the outermost posterior section, is the largest of the zones and contains about 70% of the prostate’s glandular tissue.

Moving inward, the central zone contains about 25% of the glandular tissue.

Last, is the transitional zone, which contains around 5% of the glandular tissue, and is located in the periurethral region of the prostate.

At the microscopic level, the prostate is made up of stroma, or connective tissue, and glands.

Each of these glands is surrounded by a basement membrane and lined by an outer layer of cuboidal basal cells and an inner ring of luminal columnar cells, which are within the lumen or center of the gland.

An important thing to remember is that both the basal cells and luminal cells of the prostate rely on stimulation from androgens for survival, including testosterone which, at the prostate, is converted by the enzyme 5α-reductase into the more potent dihydrotestosterone.

Okay, now, the first prostate disorder is prostatitis or inflammation of the prostate.

This can be either acute or chronic.

Acute prostatitis is usually due to bacteria. In young adults, that’s most commonly Chlamydia trachomatis and Neisseria gonorrhoea, whereas in older individuals, it’s usually Escherichia coli, followed by Pseudomonas.

A particularly high-yield fact for your test is that on a digital rectal exam, the prostate will be warm, tender and boggy.

Chronic prostatitis, on the other hand, can be bacterial or nonbacterial, such as secondary to previous infection, nerve problems or chemical irritation.

Similarly to acute prostatitis, it also presents as dysuria, but the key hint here is that the individual is typically afebrile and also complains on pelvic or lower back pain.

On digital rectal examination, the prostate may feel normal, tender, or boggy. Prostatic secretions will again show increased white blood cells, but culture may be negative in nonbacterial cases.

Moving on to benign prostatic hyperplasia or BPH for short.

This is hyperplasia of both the stroma and the glands of the prostate.

It is driven by 5α-reductase activity in the prostate which increases with age, leading to increased dihydrotestosterone production.

Dihydrotestosterone then makes prostate cells live longer and multiply faster. A high yield fact to remember is that this is actually a normal process of aging, and around 50% of men develop BPH by the age of 60.

Another important thing to remember is that BPH is not associated with any increased risk for developing prostate cancer.

Rather, as the prostate gland enlarges, small hyperplastic nodules can form within it.

A particularly high-yield fact is that these hyperplastic nodules will typically form in the periurethral region of the prostate.

When these nodules or the prostate tissue itself compress the prostatic urethra, it becomes more difficult for urine to pass though, leading to a weak and inconsistent stream of urine, called dribbling.

Since the prostate sits just below the bladder, when it’s enlarged, it can cause bladder outflow obstruction.

So the urine builds up in the bladder causing it to dilate, creating a constant sense of incomplete bladder emptying and overflow incontinence.

In response, the smooth muscle walls of the bladder will contract harder, and this leads to bladder hypertrophy were the walls thicken and become irritable.

This increases the frequency of urination at night, which is called nocturia.

Now, one complication of the stagnation of urine in the bladder is that it promotes bacterial growth, and can lead to urinary tract infections.

Also, the urine can build up back into the ureter and the kidney, causing hydronephrosis, or dilation of the renal pelvis and calyces.

Severe long-standing hydronephrosis can subsequently compress the renal parenchyma, resulting in atrophy of the renal medulla and cortex.

What’s high-yield here is that the prostate will be symmetrically enlarged, smooth, firm, nontender with rubbery or elastic texture.

Levels of prostate specific antigen or PSA, a substance produced by healthy prostate cells, will be also elevated, since there are more cells around making the PSA.

However, that’s not specific for BPH and can be true for a handful of other prostate disorders.

Treatment of BPH focuses on relieving the obstruction and allowing the urine to flow normally.

This can be done through medications like finasteride, a 5α-reductase inhibitor.

For your test, remember that 5α-reductase inhibitors shrink the prostate gland by inhibiting the conversion of testosterone into dihydrotestosterone.