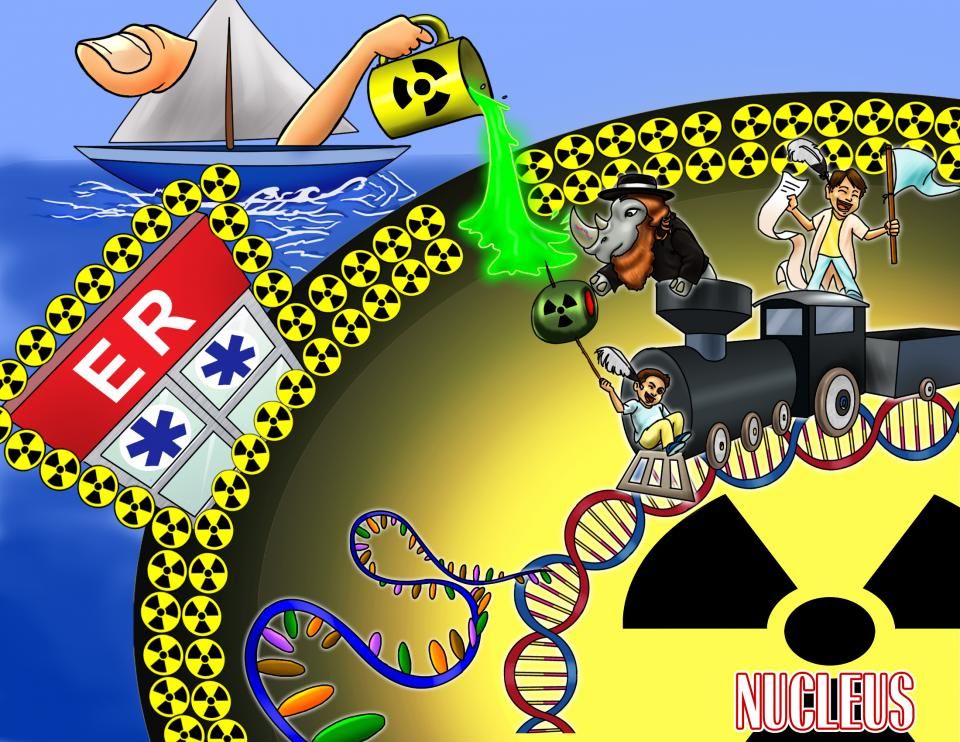 The nucleus is a cellular organelle, found in eukaryotic cells that contains most of the cell’s genetic material in the form of DNA.

DNA contains the genes, which are, essentially, blueprints for various proteins that the cell needs to live.

Most cells in the human body have a single nucleus.

But some cells, like red blood cells, have no nuclei, whereas some like skeletal muscle and liver cells have more than one nucleus.

Now, the nucleus is surrounded by the nuclear envelope.

Inside the nucleus, there is the nucleoplasm - a liquid environment very similar to the cell's cytoplasm.

Suspended in the nucleoplasm, there’s chromatin, which is the densely packed DNA, and also the nucleolus - which makes ribosomes, which, in turn, help build proteins.

Let’s start with the nuclear envelope, which has an inner and the outer membrane - both of which are made of phospholipid bilayers.

The outer membrane has lots of anchoring proteins that allow the nucleus to remain suspended within the cytoplasm - like a puppet on strings.

The inner membrane is covered by the nuclear lamina - which is a network of lamin proteins.

These lamin proteins are thin filamentous proteins that create a dense protein web within the nucleus - a bit like dense spider web.

The nuclear lamina provides something for the chromatin to drape itself over, a bit like caterpillars hanging out all over those spiderwebs.

The nuclear envelope is selectively permeable - meaning, it allows some things to pass through, while preventing others.

There are also relatively large nuclear pores, and each pore has a nuclear pore complex lining it on the inside, made out of proteins called nucleoporins, and it kinda resembles a basketball hoop with a net.

So large molecules like nucleic acids and proteins aren’t able to come and go easily, but small water soluble molecules have no trouble.

The main role of the nucleus is to house the DNA - it is, essentially, a central genetic library with instructions on how, when and what kind of proteins the cell needs to make in order to live and perform its functions.

These instructions come from one of our DNA molecules, that are really, really long - over 2 meters each when fully stretched.

So our cells have to rely on a few packing tricks to compress all that to fit inside nucleus.

Here’s where chromatin comes in. Essentially, chromatin is a fine matrix of very densely woven and compressed DNA.

There are two types of chromatin.

First, there’s euchromatin, which is loosely packed and contains genes that the cell frequently transcribes and translates.

In other words, euchromatin contains the genes that the cell frequently needs to copy from DNA into messenger RNA or mRNA and then into a protein.

Second, there’s heterochromatin, which is densely packed and contains genes that the cell rarely transcribes and translates.

Now, chromatin is actually made out of 46 separate DNA molecules each of which is called a chromosome.

A cell's nucleus is a membrane-enclosed organelle found in eukaryotic cells, which serves as the control center of a cell. It contains the cell's genetic material in the form of DNA and directs the cell's activities. Inside the nucleus, there’s also the nucleolus responsible for making ribosomes.

The nucleus has an outer membrane that consists of two layers: the inner and the outer layers. Nuclear pores run through the membrane and control the flow of molecules in and out of the nucleus.