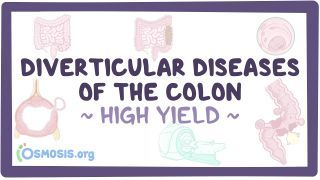 Transcript for High Yield: Diverticular diseases of the colon

At the gastroenterology clinic, there is a 62- year- old male from Germany, named Karl, who came in for his regular colonoscopy.

He is totally asymptomatic, except for occasional vague abdominal discomfort after meals.

Next, a 65- year- old Native American named James came to the emergency department after two episodes of painlessly passing fresh, red blood in his stool.

Finally, Zendaya, a 78- year- old African- American female, was brought to the hospital from a nursing home by paramedics, due to a severe pain in the left lower abdomen which started this morning.

On further history, they all had diets low in fiber and high in fat and red meat and suffered from chronic constipation.

Zendaya’s nursing home attendant reports that lately her constipation has been even worse than usual; in fact, her last bowel movement was more than three days ago.

Karl, James and Zendaya all have diverticula in the colon.

Diverticula are small outpouchings that form along the walls of a hollow structure, most commonly, the large intestine.

According to their pathogenesis, diverticula can be broadly grouped into traction and pulsion diverticula.

Traction diverticula occur due to the pulling forces of an adjacent inflammatory site, resulting in scarring and outpouching of all layers of the intestinal wall.

These are also known as true diverticula.

Next, there’s pulsion diverticula, which are a result of high pressures created during a strained bowel movement.

The pressure pushes on the mucosa and submucosa until they bubble out through weak spots along the wall, like where a blood vessel penetrates the muscle layer of the intestine.

These are also known as false or pseudodiverticula since they don’t involve all layers of the intestinal wall.

For your exams, it’s important to know that, most of the time, diverticula in the large intestine, and particularly, the left and sigmoid colon, are pulsion or false diverticula.

Having diverticula in the colon is called diverticulosis, and it’s more common in individuals older than 60 years old, consuming a diet low in fiber and high in fatty foods, like red meat.

Fiber helps stool move more easily through the colon, so diets low in fiber can lead to constipation which means more force is required to move bulky, hard stool.

Most of the time, people won’t even know they have diverticulosis because they don’t have any symptoms besides constipation and mild or vague abdominal discomfort after meals.

Diagnosis is typically made incidentally during a colonoscopy or CT scan that might be done for another reason entirely.

Okay, so even though diverticulosis doesn’t cause major distress in the person, they can still cause serious complications.

One complication is bleeding due to weakening and breaking of blood vessels near a diverticula. It’s important to know that diverticulosis is the most common cause of acute lower gastrointestinal bleeding.

This will typically appear in your exam as an elderly patient with a history of chronic constipation and painless hematochezia, which means bright red or maroon blood passing from the rectum.

Now, another complication of diverticulosis is acute diverticulitis, which is an infection of the diverticula.