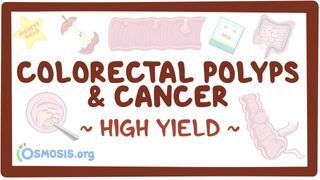 At the gastroenterology clinic, there is a 63-year-old Caucasian male, named Neil, who's complaining about progressive fatigue and weight loss in the last 6 months.

At the same time, an 18-year-old Caucasian male, named Brendon came in for a colonoscopy screening.

He was concerned after learning that both his grandfather and uncle were diagnosed with colon cancer in their early thirties.

His doctor detected more than one hundred polyps on colonoscopy.

Now, both people have some form of colorectal polyps or cancer.

But first let’s start with colorectal polyps, which are overgrowths of epithelial cells in the colon or rectum.

Hamartomatous polyps are solitary, disorganized masses that contain normal tissue found at the site of the polyp.

These polyps can occur sporadically, or in genetically inherited conditions, such as juvenile polyposis syndrome or Peutz-Jeghers syndrome; and they have mild malignant potential.

Next, hyperplastic polyps, are the most common polyps and they are small and typically located in the rectosigmoid region.

Usually, these polyps are benign lesions, but in rare cases, they can evolve into serrated polyps, which have malignant potential.

Mucosal polyps, which are clinically insignificant, are usually small, less than 5mm, and they look similar to surrounding normal mucosa.

On the flip side, submucosal polyps can include lipomas, leiomyomas, fibromas, or other lesions.

Adenomatous polyps are caused by a mutation in the tumor suppressor gene called adenomatous polyposis coli or APC for short, which is located on chromosome 5 and is responsible for the regulation of cell growth and cell adhesion.

Moreover, the mutation of the APC gene is present in all familial polyposis syndromes and most cases of sporadic colon cancer.

The first step is the mutation of one allele of the APC gene, which leads to the formation of a small polyp, also called early adenoma.

The second step occurs when the small polyp acquires mutation of protooncogene called KRAS, which is further followed by an increase in the size of adenoma and formation of the late adenoma.

Usually, adenomatous polyps are asymptomatic, but in some cases, villous polyps can cause bleeding, secretory diarrhea, and partial intestinal obstruction.

Finally, serrated polyps are often flat or sessile and are characterized by saw-tooth appearance under the microscope.

They contain methylated CpG islands in their genes.

DNA methylation regulates gene expression, which can cause silencing of DNA-repair genes, eventually leading to more mutations and malignancy.

After polyps, let’s look at colorectal cancer which is the third most common cancer worldwide.

Most commonly it affects people older than 50 years old, and in 25% of the cases, there's a positive family history.

Individuals with acromegaly, a condition where the pituitary gland produces too much growth hormone, are at higher risk of developing colorectal cancer.

And finally, increased cyclooxygenase-2 activity is linked to some forms of colon adenocarcinoma, so frequent use of inhibitors of this enzyme like aspirin can lower risks.

For your exam, you should remember that the most common form of colorectal cancer is adenocarcinoma and it’s most commonly located in the rectosigmoid, then ascending colon, and rarely in descending colon.

Initially, adenocarcinoma can be asymptomatic but as they grow, their location determines their manifestations.

Left-sided colon tumors are usually smaller, but as they infiltrate the wall of the colon, they encircle the lumen, eventually narrowing the lumen and causing obstruction.

A frequently tested concept is what is the presentation of an individual with left-sided colorectal cancer; therefore it’s important to know that these individuals present with obstruction and altered bowel habits, such as narrowing of stool, colicky pains, constipation, abdominal distension, but also hematochezia, nausea, and vomiting.

Moreover, keep in mind that colorectal cancer is the most common cause of iron-deficiency anemia in postmenopausal women or men aged 50 or older.

Other manifestations of right-sided colon cancers include progressive fatigue, malaise, and weight loss.

Common complications of colorectal cancer include local and distant metastasis, but also bowel perforation and peritonitis.

Now as far as screening goes, you should screen low-risk individuals at the age of 50; while individuals with a first-degree relative who has colon cancer, at the age of 40 or 10 years prior to their relative’s diagnosis.

On the other hand, individuals with hereditary polyposis syndromes or inflammatory bowel disease have different guidelines for screening like earlier and more frequent colonoscopies.

But don’t forget, diagnosis is confirmed with biopsy!

As far as treatment goes, colorectal cancer can be treated with surgical resection of the colon, colectomy, and chemotherapy.

What you have to know for your exam is that serum carcinoembryonic antigen levels, or CEA levels are increased in 60-90% of individuals with colon cancer.

But, the CEA level is not specific for colon cancer only, it’s also increased in pancreatic, gastric, breast malignancies, as well as in inflammatory bowel disease, cirrhosis, and pancreatitis; therefore it can be only used to monitor the recurrence of colorectal cancer.