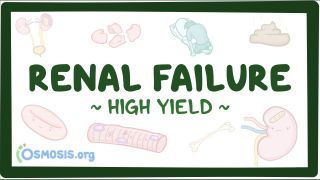 On the Nephrology ward, two people came in.

The first one is 55 year old Matilda, who came in with oliguria, fever and a rash on her arm.

Matilda also has a history of taking NSAIDs for her knee-pain.

The second one is 34 year old George, which came in with oliguria, hypotension, tachycardia and cold extremities.

George says that he’s also been having diarrhea for a few days now.

BUN and creatinine levels were high for both of them.

Both Matilda and Geroge have renal failure.

Now, renal failure is when the kidneys aren’t functioning properly.

Now the kidney’s job is to regulate what’s in the blood, so they might remove waste, or make sure electrolyte levels are steady, or regulate the overall amount of water, and even make hormones, such as erythropoietin, which stimulates red blood cell production.

Okay, so blood gets into the kidney through the renal artery, into tiny clumps of arterioles called glomeruli where filtration happens.

After filtration, the stuff that’s filtered out, called the filtrate, moves into the renal tubules, where reabsorption and secretion of fluid and electrolytes happens.

In fact, in the blood, the normal ratio of blood urea nitrogen, or BUN, to creatinine is between 5 and 20 to 1—meaning the blood carries 5 to 20 molecules of urea for every one molecule of creatinine, and this is a pretty good way to assess kidney function!

Now, back to renal failure.

There are two types of renal failure: acute and chronic.

This is when the kidney isn’t functioning at 100% and that decrease in function develops relatively quickly, typically over a few days.

In this case, the individual typically presents with oliguria, even anuria and levels of BUN and creatinine will be high.

This is when the kidney function gradually decreases over a minimum of three months.

This is usually caused by hypertension, diabetes mellitus, or congenital renal conditions.

Both acute and chronic renal failure has some pretty dire consequences.

A lot of the things that the kidneys normally excrete are now stuck in the body.

First, H+ ion secretion is impaired and this can lead to metabolic acidosis.

Secondly, potassium excretion is also impaired and this can lead to hyperkalemia.

Now, in certain cases, such as heart failure, pulmonary edema or hypertension, the kidney will retain more water and sodium, and so the individual can present with peripheral or periorbital edema.

Next, there’s uremia, which is caused by the accumulation of uremic toxins, including urea itself.

Symptoms include nausea and anorexia.

There’s also uremic pericarditis- which is the inflammation of the pericardium.

Clinically, there’s progressive encephalopathy - that causes asterixis, which is a tremor in the hand when the wrist is extended, just like a bird flapping its wings.

Now, chronic kidney disease can lead to even more problems over a long period of time.

If a child is affected, it can lead to growth retardation and developmental delay, especially in individuals that had to undergo dialysis.

Another important fact for your exams is that there’s also erythropoietin deficiency and this leads to anemia.

This happens for a number of reasons and it’s important to memorize all of them.

Next, the kidneys are needed to convert 25- hydroxyvitamin D to active 1,25 dihydroxyvitamin D, or calcitriol, which is the active form of vitamin D which helps with intestinal calcium reabsorption.

As a result, there will be hypocalcemia.

Now, since there’s too much phosphate and too little calcium, this can affect the bones and they can become thinner and more prone to break.

Finally, the extra phosphate in the blood can also bind to calcium and they can deposit in various tissues, such as the vascular tissue.

Okay, now that we’ve gone over the general pathology, let’s look at some specific causes of acute kidney injury.

With prerenal AKI, the cause is decreased blood flow into the kidneys.

Now, since less blood’s going to the kidneys, this means that less blood is being filtered, so there’s a decrease in the glomerular filtration rate, or GFR, which is how much blood, usually in mL, the kidneys filter through their glomeruli per minute.

If less blood is being filtered, that means less urea and creatinine are filtered out, and more stays in the blood, so levels of BUN and creatinine will be high.

Also with less blood being filtered, the kidneys activate the renin-angiotensin system, which causes aldosterone release by the adrenal glands.

This hormone tells the kidneys to reabsorb sodium.

Water and sodium reabsorption is also tied to urea reabsorption, so in this situation, urea gets reabsorbed and so even more urea gets into the blood, resulting in a BUN to creatinine ratio of greater than 20:1.

Now, looking at the urine, more sodium is being retained, so the urine sodium is usually less than 20 mEq/L.

The ratio of sodium excreted to total sodium filtered, or FENa, is usually less than 1%, and finally that urine is more concentrated because less water is excreted, so typically the urine’s greater than 500 milliosmoles per kilogram.

All this can lead to hypovolemic shock. In a hypovolemic states, the individual presents with tachycardia, hypotension, reduced skin turgor, and cool extremities.

One example is severe systolic heart failure leading to not enough blood getting pumped to the kidneys.

Finally, systemic vasodilation, like with sepsis, can lead to prerenal AKI.

Next there’s intrinsic or intrarenal AKI, which is due to damage to the tubules, the glomerulus, or the kidney interstitium, which is the space between tubules.

In general, with intrarenal AKI, there’s kidney damage, causing them to lose the ability to filter blood, and secrete or reabsorb materials like normal.

If urea isn’t reabsorbed, less urea stays in the blood relative to creatinine, and the BUN to creatinine ratio falls to less than 20:1.

Also, renal tubule cells can’t reabsorb sodium, meaning the urine Na+ goes above 40 mEq/L, and the FENa goes above 2%, and finally since water’s not being reabsorbed as much, urine osmolality falls below 350 mOsm/kg.

Okay, now, the most common cause of intrarenal AKI is acute tubular necrosis or ATN, which causes damage to the tubules.

On your tests, make sure you don’t confuse this with prerenal AKI where there’s decreased filtration of blood, but the kidneys are not damaged.