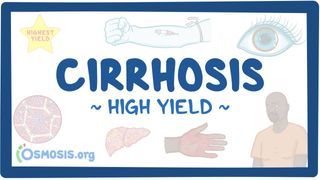 At the family medicine clinic, a 52- year- old male immigrant from Africa, named Jamar, came in for a checkup for the first time in a decade.

On questioning, he admits to an extensive history of alcohol abuse.

Next, a 70- year- old Caucasian female, named Eleanor, with a history of chronic hepatitis C infection, is brought to the emergency department by paramedics due to altered mental status.

She is completely disoriented and unable to provide an adequate history. Neurologic examination also reveals asterixis.

The difference is that Jamar has an AST level twice as high as ALT, in contrast with Eleanor, who has an ALT higher than AST. Eleanor, in particular, also has high serum levels of ammonia.

Both Jamar and Eleanor have cirrhosis.

This is when chronic inflammation damage the liver causing it to become fibrotic.

Normally, the liver is highly regenerative but scar tissue can replace liver cells which prevents regeneration and when this goes on for too long, it reaches the point where the damage is no longer reversible.

If enough of the liver is replaced by scar tissue in advanced cirrhosis, a liver transplant might be needed. .

Now, if we zoom into a hepatic lobule, we can see that it’s made of sheets of hepatocytes with sinusoids between them.

The sinusoids are made of branches of the portal vein and hepatic artery, and together with the bile duct, the form the portal triad which runs towards the central vein.

Now, there’s a space around each sinusoid, called the perisinusoidal space which contains stellate cells.

When the hepatocytes are injured, they cluster together and form regenerative nodules.

Here, they secrete paracrine factors that activate the stellate cells, which then proliferate, and start secreting transforming growth factor beta1, or TGF-beta. This causes them to produce collagen. The collagen build up around the nodules and help form scar tissue, leading to fibrosis.

Okay, let’s look at some of the causes of cirrhosis. First off, there’s chronic viral hepatitis which is usually due to a hepatitis B or C infection that last for over 6 months.

Beta oxidation in lipid metabolism also needs this coenzyme, so when they’re used up, lipids accumulate inside hepatocytes.

Next, free oxygen species are also created during alcohol metabolism, and this could also damage hepatocytes.

In NAFLD, insulin resistance cause fat to build up in the hepatocytes, so both kinds of liver disease lead to steatosis, which is the infiltration of liver cells with fat, and steatohepatitis, which is when there’s fatty infiltration along with inflammation.

Now, steatosis and steatohepatitis are reversible, but when too much damage is done, they can lead to cirrhosis and this is nonreversible.

Then, there’s hemochromatosis, which is an autosomal recessive disorder caused by a mutation in the HFE gene that leads to increased iron absorption in the small intestine.

Another cause is frequent transfusions, like when a person has thalassemia.

On your exam, individuals will have a classic triad of cirrhosis, diabetes mellitus, and skin hyperpigmentation, the latter two are lumped together with the term bronze diabetes since the skin looks bronzed or tanned.

Treatment consists of reducing iron in the body with phlebotomy or with iron chelators like deferasirox, deferoxamine, and deferiprone.

This is caused by a mutation in hepatocyte copper-transporting ATPase which is needed to move copper from the liver into bile for excretion, and it’s also needed to synthesize ceruloplasmin, the copper storage and transport protein in the blood.

So the mutation leads to excessive copper buildup in the liver, and low ceruloplasmin level.

Eventually, the copper overflows into the blood and deposits in the brain and eyes.

A typical case in your exam will present an individual with cirrhosis and neurological symptoms like dysarthria, dystonia, tremor, and parkinsonism or psychiatric symptoms like depression and personality changes.

And another high yield finding is Kayser- Fleischer ring, which is a dark ring around the iris due to copper deposits in the cornea.

Treatment include cheltators that bind to excess copper, like penicillamine or trientine.

This protein normally inactivate neutrophil elastase, but when there’s a deficiency, these elastase can damage the alveoli in the lungs, resulting in emphysema.

And in the liver, misfolded alpha-1 antitrypsin builds up, killing hepatocytes and leading to cirrhosis.

So, a test question will often present a young person with cirrhosis and dyspnea without a history of smoking.

Finally, cirrhosis can be caused by biliary diseases like primary sclerosing cholangitis and primary biliary cholangitis.

Both disorders cause damage to the biliary system, leading to scarring of the bile ducts that prevent bile from draining.
The bile backs up into the liver, causing damage, and eventually cirrhosis.

Key symptoms for both include jaundice, pruritus, dark urine, clay-colored stool, and hepatosplenomegaly.

Primary sclerosing cholangitis or PSC, is a progressive disease in which there’s inflammation, fibrosis, and strictures of the intra- and extra- hepatic parts of the biliary tree.

This is classically described as “onion- skin” fibrosis, because it looks a bit like an onion skin, with concentric rings of fibrosis around the bile duct.

Now, in primary biliary cholangitis, or PBC, the epithelial cells lining the intrahepatic biliary ducts are gradually destroyed, but the cause is unknown.

It’s possibly autoimmune in nature since it’s classically seen in middle- aged females with another autoimmune condition, like autoimmune thyroiditis or rheumatoid arthritis.

Since the liver plays a major role in cholesterol metabolism, PBC can lead to hypercholesterolemia.

This can manifest as xanthelasmas which are cholesterol deposits that form skin nodules, typically around the eyes.

Now, sometimes, the exam will try to test you on cirrhosis by presenting its complications.

So, let’s start with portal hypertension.

So, as the central veins and sinusoids become compressed by scar tissue, their pressure starts to build up.

Higher portal pressure means that fluid in blood vessels is more likely to get squeezed out into tissues and then leak into large open spaces like the peritoneal cavity.

The classic patient with ascites will present with abdominal distention, as well as shifting dullness on percussion.

If abdominal distention is also accompanied by severe abdominal pain and fever or chills, this might be a sign of spontaneous bacterial peritonitis.

This is an infection of ascitic fluid by a pathogen, most commonly a gram negative one, like Escherichia coli, or Klebsiella pneumoniae, and, less commonly, gram positive, like Streptococcus pneumoniae.