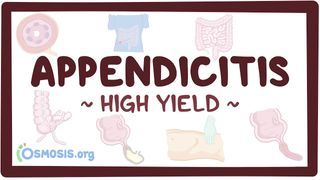 While in the Emergency Department, Bella, a 22-year-old woman, presents with abdominal pain that started 6 hours ago.

The pain was initially located around the umbilical area but it has migrated to the right lower quadrant in the past few hours.

The pain is sharp, like being stabbed with a knife and it gets worse with movement.

A physical examination showed tenderness of the right lower quadrant with moderate guarding and a low-grade fever of 100.4°F. Shortly after, Edward, who’s 11, presents with generalized abdominal pain with vomiting and diarrhea.

On examination, he appears ill and has a temperature of 104°F.

His abdomen is tense with generalized tenderness and guarding.

No bowel sounds are present.

Blood tests were ordered in both cases, detecting an increased white blood cell count of 12,000 cells per microliter with 85 percent neutrophils.

Now, both people have appendicitis.

Now the appendix is the little close-ended hollow tube that’s attached to the cecum of the large intestine, and sometimes it’s called the vermiform appendix, where vermiform means “worm-shaped.”

Its function is actually unknown, though some theories suggest it might be a “safe-house” for the gut flora and that it plays a part in the lymphatic and immune system.

Ok, so appendicitis usually occurs because something gets stuck and obstructs the appendix.

That something could be a fecalith, which is a hardened lump of fecal matter, a piece of undigested material like gum or seeds, or even a clump of intestinal parasites like pinworms.

Another cause of obstruction could be lymphoid follicle growth, also called lymphoid hyperplasia, and a high yield fact is that unlike a fecalith, this is more common in children.

Now, because the intestinal lumen is always secreting mucus and fluids from its mucosa, fluid and mucus build up in the obstructed appendix, which increases the pressure inside.

This makes it grow in size and it will physically push on the nearby afferent visceral nerve fibers, causing abdominal pain.

Along with that, the flora and bacteria in the gut, usually E. coli and Bacteroides fragilis, will multiply in the appendix.

This triggers the immune system to recruit white blood cells and pus starts to accumulate, resulting in full-blown inflammation of the appendix.

As the pressure keeps growing and the appendix continues to swell up, it will push on and compress nearby small blood vessels causing ischemia and local necrosis.

For your tests, remember that as a consequence, inflammation extends to the serosa of the appendix, where it begins to spread to the parietal peritoneum, irritating it.

The growing colony of bacteria can then invade the wall of the appendix causing more inflammation, and the wall becomes weaker and weaker, to the point where the appendix can rupture.

This is one of the worst complications of appendicitis, as it allows bacteria to escape into the peritoneum and cause peritonitis.

Regarding symptoms, all you need to know is that acute appendicitis typically starts with nausea, vomiting, fever, and periumbilical abdominal pain due to visceral nerve irritation.

Within 24 to 48 hours the appendix becomes more swollen and inflamed and it irritates the abdominal wall, causing the pain to get more severe and migrate to the right lower quadrant, as well as causing a fever.

Also, it’s a good idea to memorize some of the classical signs of this disease.

First, is McBurney’s sign which is tenderness at McBurney's point which is located one-third of the distance from the anterior superior iliac spine to the belly button.

Another sign is Rovsing’s sign, which is palpation of the left lower quadrant and moving along the path of the large intestine towards the right.

This will push the contents in the bowel towards the appendix further irritating it, causing pain in the right lower quadrant.

The obturator sign is when the person flexes the hip and knees to 90 degrees while lying down, and the clinician rotates the hip internally.

Since the inflamed appendix lies in the pelvis, it will cause irritation of the obturator internus muscle when this maneuver is performed.

Finally, we have the psoas sign where the person lies on their left side and the clinician extends the right hip.