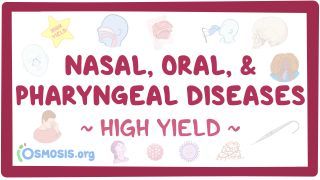 While in the ENT Clinic, two people present with trouble breathing through the nose and have frequent nose bleeds.

Andrew says the problems appeared gradually and feels that something is stuck in the nose.

Andrew also has a history of aspirin allergy.

On examination, everything seems normal, except for a decrease in the sense of smell.

Sarah, on the other hand, has noted these problems ever since childhood.

Sarah also mentioned that the symptoms get worse during the spring or proximity to flowers.

On examination, presentation is nasal congestion and red, itchy, swollen eyes with frequent bouts of sneezing.

Blood tests were normal in both individuals.

Now, from what we can gather, both have some type of nasopharyngeal disease.

But first, a bit of anatomy.

It is part of the pharynx, alongside the oropharynx, and hypopharynx.

Ok, so we can begin with nasal polyps.

Now, remember that a nasal polyp is a clump of epithelial cells that undergo hyperplasia and form a growth of tissue along the lining the nasal cavity.

There are some genetic causes too; that’s high yield.

You also need to know that usually, nasal polyps form in the ethmoid or maxillary sinuses and are typically non-cancerous.

As polyps enlarge, they often obstruct the airflow as well as the mucus drainage, allowing pathogens to linger in the sinuses and cause recurrent infections.

For symptoms, know that this leads to progressive nose breathing difficulties, nose foreign body sensation, the loss of the sense of smell, or anosmia, and bouts of fevers and headaches due to infections. In young infants, it can cause hypoxia, which gives a bluish tinge to their skin color, called cyanosis.

This specifically happens in infants because they are obligate nose breathers, meaning they really prefer breathing through their nose.

If bilateral obstruction occurs, a period of cyanosis occurs, then the infant cries and breathes through the mouth, resolving the cyanosis.

So on the exam, look for an infant with periodic bouts of cyanosis, resolved by crying.

Now, regarding diagnosis, all you need to recall is that nasal endoscopy or CT can help diagnose nasal polyps, and determine the size, location, and number.

The treatment is to shrink them using nasal steroids, which work by decreasing the inflammation and swelling of the polyp.

Those unresponsive to steroids are removed by endoscopic sinus surgery.

Next, let’s look at rhinitis, which is irritation and inflammation of the mucous membrane inside the nose.

It can be caused by things like viral or bacterial infections, irritants, and more commonly, allergens.

A high yield concept to remember is that allergic rhinitis is a type 1 hypersensitivity reaction, which is a type of allergic reaction that starts with exposure to an environmental allergen and is characterized by immunoglobulin E antibody production and mast cell degranulation releasing mediators; like bradykinin and histamine that causes inflammation.

This leads to excess fluid build up in the nasopharynx and facial tissue, causing symptoms.

These symptoms can begin just minutes after exposure to the allergen and can persist for weeks at a time.

Ok, so the most common way to diagnose allergic rhinitis is through skin testing.

One type of skin testing is called the patch test, where allergens are applied to small patches and stuck onto the skin.

If the skin under a particular patch becomes irritated, it suggests an allergy to that substance.

Blood tests might show elevated immunoglobulin E antibody and eosinophil levels, but this is not always reliable.

Also, remember that allergic rhinitis may be part of the atopic triad, which also includes atopic dermatitis and asthma.

In terms of treatment, the best option is to simply avoid the triggering allergen if possible.

Also, remember that if the individual is symptomatic, antihistamine medications like Chlorpheniramine and Terfenadine can be used to suppress the effect of mast cell degranulation.

Let’s now discuss sinusitis or rhinosinusitis, which is the inflammation of the mucosal lining of the nasal cavity and paranasal sinuses, especially of the maxillary sinuses.

It can be caused by either viruses, or bacteria like Streptococcus pneumoniae, Haemophilus influenzae or Moraxella catarrhalis.

It can also be caused by fungi like Aspergillus fumigatus, but a high yield fact to remember is that fungal sinusitis usually occurs in immunosuppressed people and it can present with a high-grade fever and dark necrotic ulcers on the face.

Now, it might help you to ,know that the resulting inflammatory process causes increased edema and mucus production, which block the sinus ostium, and, consequently, the normal ventilation and drainage of the sinus.

As the edema and mucus production progresses, it can cause nasal blockage, hyposmia or loss of the sense of smell, as well as tenderness and erythema over the affected sinuses, which is a key clue.

As a particularity, infections in sphenoid or ethmoid sinuses may extend to cavernous sinus and cause cavernous sinus syndrome, which is a condition characterized by multiple cranial nerve palsies.

Diagnosis is clinical, based on the presenting symptoms.

Radiographs and secretion culture are not recommended for evaluation of routine acute sinusitis.

Treatment is supportive in case of viral rhinosinusitis.

It can encompass adequate rest and hydration, warm facial packs, and steam inhalation.

Symptomatic medication might be needed as well, like analgesics and antipyretics for fever or intranasal corticosteroids for congestion.

In case of bacterial sinusitis, antibiotics like amoxicillin are added to therapy.

As for fungal rhinosinusitis, surgical debridement of the necrotic tissue is often necessary, in addition to antifungal medications like amphotericin B.

Next up is epistaxis or nose bleeding, which can be either anterior or posterior.

Anterior epistaxis originates from a plexus of vessels known as the Kiesselbach’s plexus, located at the anterior part of the nasal septum.

Posterior epistaxis originates in the posterior septum overlying the vomer bone, and it involves the spheno-palatine artery, a branch of maxillary artery.

It might help to remember the most common causes of nose bleeding: trauma and drying of the nasal mucosa, and rarely, hypertension and coagulation disturbances.

Regarding symptoms, bleeding can occur in one or both nares, individuals might have local pain, and in rare instances, nosebleeds may drain posteriorly to cause hemoptysis or hematemesis.

Diagnosis is made clinically, using a nasal speculum and a bright headlamp or head mirror which can detect if the site is anterior or posterior.