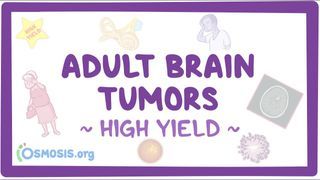 In the neurology ward, a 64-year old female, named Angela, came in complaining of morning headaches along with nausea and vomiting for the past few weeks.

Her husband says that her personality has changed over the last few weeks and she seems more aggressive.

Brain MRI revealed a mass in the frontal lobe.

Tissue biopsy shows a pseudo-palisading pattern with necrosis in the middle and viable cells lining up in the periphery.

Now, next to Angela, there’s Jerry, a 59-year old male who’s also having morning headaches for the past few months.

A brain MRI is ordered and reveals a mass on the brain surface, just under the dura mater.

Finally, there’s a 40-year old male, named Dan, who complains of ringing in the ears and hearing loss on one side.

A brain MRI is done and showed a mass on the cerebellopontine angle.

Okay, Angela, Jerry, and Dan all had brain tumor. Brain tumors occur when there’s uncontrolled growth of abnormal cells within the brain.

Now, brain tumors can occur in both children and adults.

In this video, let’s focus on adult brain tumors. In adults, metastatic tumors are much more common than primary tumors, in fact, they account for more than half of the cases.

In order of decreasing frequency, they metastasize from the lung, breast, melanoma from the skin, kidneys, and colon.

Now, the most common primary brain tumor in adults is glioblastoma multiforme, which is a type of astrocytomas.

Meningiomas and pituitary adenomas are next on the list. Less common brain tumors include oligodendrogliomas, hemangioblastomas, and Schwannomas. immunocompromised people, like organ transplant recipients or individuals with AIDS, are at high risk of primary central nervous system lymphoma caused by the Epstein-Barr virus.

In children, most brain tumors are infratentorial, whereas in adults, they are usually supratentorial, and that’s something you must know for the test!

Metastatic tumors can arise in both regions.

Finally, brain tumors can also be classified, or graded, based upon their severity on the World Health Organization’s scale.

But not all brain tumors have all four grades because some tumors are typically more benign, whereas others are more aggressive.

Alright, let’s look at the Causes of brain tumors in general.

The main environmental risk factor for brain tumors is exposure to ionizing radiation, which can come from therapeutic radiotherapy for cancer, or diagnostic imaging like CT scans.

Electromagnetic radiation from cell phones and microwaves is currently being researched as potential risk factors in humans.

Another concept that is frequently tested on the exams is that Meningiomas are particularly more common in women, possibly because the tumor cells possess estrogen and progesterone receptors.

Both are associated with meningiomas, which can also arise in people with multiple endocrine neoplasia type 1.

The word “subependymal” literally means under the ependymal cells which line the cerebral ventricles, so these tumors are commonly found along the border of the lateral ventricles.

Alright, now let’s take a closer look at the different types of supratentorial adult brain tumors, since they make up the large majority in adults.

Let’s start with glioblastoma multiforme which is a type of astrocytoma.

Because astrocytes are found throughout the brain and spinal cord, astrocytomas can form in all of these locations, but glioblastomas are most common in the cerebral hemispheres.

Because of their quick growth and invasion of nearby tissues, glioblastomas tend to rapidly cross the corpus callosum, creating what’s called a “butterfly glioblastoma.”

Cancer cells typically recruit blood vessels to provide them nourishment in a process called angiogenesis, but glioblastomas proliferate so fast that even with angiogenesis their nutrient demand outpaces the blood supply.

As a result, because the blood supply serves the peripheral tumor cells first, the tumor cells at the center of the tumor die off creating necrotic regions with viable cells around the edges.

Another common supratentorial tumor is a meningioma.

Meningiomas come from cells found in the arachnoid mater of the meninges, called arachnoid cap cells, and they often attach to the dura mater.

Since these tumors are not within the brain parenchyma, they are also called extra-axial tumors.

They typically form in parasagittal regions of the brain but they can also arise on the spinal cord.

They are graded I through III and tend to be relatively slow growing.

There are several cell types in the anterior pituitary that each secrete a tightly regulated level of a particular hormone; for example, lactotroph cells secrete the hormone prolactin.

Pituitary adenomas are typically benign so they’re classified by the hormone that’s released as the tumor forms, and by the size of the tumor; rather than using the standard WHO classifications.

Now, a relatively rare supratentorial tumor is an oligodendroglioma.

Because oligodendrocytes are found throughout the brain and spinal cord, oligodendrogliomas can form in any of these locations, but adult oligodendrogliomas typically form in the frontal lobes of the cerebral cortex because those neurons are the most heavily myelinated.

These tumors are categorized as grade II or III, with an overall tendency to be relatively slow-growing tumors, though they still have the ability to become malignant.

Okay, so, now let’s focus on infratentorial adult tumors, such as hemangioblastoma.

Hemangioblastomas are tumors that derive from cells with blood vessel origins, so while they can develop anywhere in the brain they are most often found in the cerebellum, especially in a middle-aged person.

They are slow-growing tumors and are typically grade I.

Hemangioblastomas are associated with Von-Hippel-lindau syndrome, a genetic disorder that causes many different types of tumors, like clear cell renal carcinoma, pancreatic tumors, and adrenal tumors that cause pheochromocytoma.

In the head, it causes hemangioblastomas in the brain and retina, but also endolymphatic sac tumors in the inner ear.