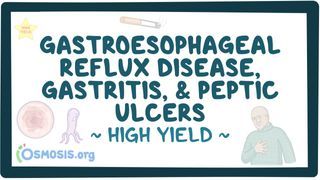 A 61-year-old man, named Shawn, comes to the emergency department because of substernal chest pain and heartburn.

He mentions that his symptoms worsen typically after coffee, heavy meals or during times of stress.

He also feels the pain at night when he is lying in bed and has previously been woken from sleep by discomfort.

He has not noticed any dyspnea, diaphoresis, or palpitations but is currently experiencing some nausea and a sour taste in his mouth.

His ECG is normal.

GERD is a condition caused by a transient lower esophageal sphincter relaxation, which enables stomach contents and acid to re-enter esophagus and damage esophageal mucosa.

As a result, people with GERD present with symptoms such as retrosternal chest pain, heartburn, regurgitation, and dysphagia.

It’s important to note that GERD symptoms tend to worsen after eating, when lying down, or bending over.

Now, if stomach acid gets to the throat, it can cause laryngopharyngeal reflux, which has a different set of symptoms such as acidic taste in the mouth, sore throat, chronic cough, and hoarseness.

In the mouth, gastric acid can even damage tooth enamel.

Finally, if inhaled, stomach acid can cause pneumonia and asthma.

Risk factors for GERD include lifestyle habits such as caffeine, alcohol, and smoking; use of some medications, such as antihistamines and calcium channel blockers; but also, obesity; pregnancy; and Zollinger-Ellison syndrome.

For your exam, it’s important to know that long-term complications of GERD include esophagitis, esophageal strictures, Barrett's esophagus, esophageal adenocarcinoma, and pulmonary fibrosis.

Now, a classic GERD presentation can be diagnosed based on clinical symptoms and history alone, but diagnostic methods such as endoscopy or x-ray with barium contrast can be useful in identifying GERD complications.

The treatment of gastroesophageal reflux disease is based on lifestyle changes, such as eating small servings and avoiding heavy food, coffee, alcohol, and smoking; and medical therapy, which includes the use of antacids, H2 receptor antagonists, and proton pump inhibitors.

Finally, surgical treatment can be an option in those individuals whose symptoms do not improve after medical therapy; or in individuals that have developed complications, such as esophageal strictures or Barrett's esophagus.

Now Barrett’s esophagus is a premalignant condition that develops when there’s chronic exposure of the lower part of the esophagus to stomach acid.

As mentioned, this is especially common in individuals with GERD.

The acid irritates the mucosa of the esophagus causing inflammation and subsequent necrosis.

Eventually, this results in metaplasia where the normal nonkeratinized stratified squamous epithelium of the lower esophagus is replaced with nonciliated columnar epithelium and goblet cells; a type of cell that’s better adapted to withstand the acidity.

Now you have to know that the intestinal metaplasia is a normal, adaptive response of the esophageal mucosa.

Like how you can get a tan when exposed to sunlight.

But if the irritation persists, metaplasia can progress to dysplasia and eventually esophageal adenocarcinoma.

Individuals with Barrett’s esophagus are often asymptomatic, but in some cases, they can present with symptoms typical of GERD, such as heartburn, regurgitation, and dysphagia.

Finally, Barrett's esophagus is diagnosed by esophagogastroduodenoscopy with biopsy; and it’s treated by endoscopic ablation or surgical resection.

Moving on to esophageal cancer.

The two main types of esophageal cancer are adenocarcinoma and squamous cell carcinoma.

Esophageal adenocarcinoma typically affects the lower third of the esophagus and it’s the most common type of esophageal cancer in the United States of America.

On the other hand, esophageal squamous cell carcinoma typically affects the upper two-thirds of the esophagus and it’s the most common type of esophageal cancer worldwide.

Another risk factor is food containing N-nitroso, like betel nuts, which is chewed like tobacco in Asian countries.

Initially, individuals with esophageal cancer are asymptomatic; but as cancer obstructs the esophageal lumen it causes problems, such as dysphagia, initially for solids and then for liquids.

This can also lead to weight loss.

Esophageal cancer has an aggressive course because there’s no serosa in the esophageal wall to serve as a barrier between the esophagus and surrounding structures.

Diagnosis is made by esophagogastroduodenoscopy, which is an imaging study that allows direct visualization and biopsy of esophageal cancer.

Finally, treatment options for this condition include endoscopic mucosal resection or mucosal ablation, esophagectomy, and chemoradiation.

Okay, let’s move down to the stomach and look at gastritis, which is an inflammation of the gastric mucosa.

There are two types of gastritis, acute and chronic gastritis.

First, let’s start with acute gastritis, which is caused by an imbalance between mucosal defenses and the acidic environment of the stomach.

Acute gastritis starts with gastric erosions, which are mucosal lesions that are limited to the mucosal layer only.

Gastric erosions should not be confused with gastric ulcers because ulcers can penetrate into the submucosa and or deeper.

Now, gastric erosions can be caused by excessive drinking of alcohol or long-term use of NSAIDs.

Also, acute gastric mucosal lesions can be caused by extreme physiological stress, such as sepsis, shock, and trauma.

These lessons can range from superficial erosions to full-thickness ulcers, which are called stress ulcers.

Curling’s ulcers are typically seen in individuals with severe burns, who develop hypovolemia and subsequent ischemia of gastric mucosa.

On the other hand, Cushing’s ulcers are seen in individuals with brain injuries, when there’s an overstimulation of the vagus nerve, which results in an increased production of ACh and gastric acid.

Now, here’s an easy way to distinguish the two: think of curling iron for Curling’s ulcers and burns; and on the other hand, think of the brain and how it needs to be cushioned for Cushing’s ulcers.

Once the causative stressors are eliminated, stress ulcers spontaneously heal over the next few weeks.

Individuals with acute gastritis typically present with epigastric pain, nausea, and vomiting; but in rare cases, they can present with life-threatening upper gastrointestinal bleeding that leads to melena.

On the other hand, in chronic gastritis, chronic inflammation leads to gastric atrophy, which is further followed by metaplasia.

If the inflammation persists, metaplasia can progress to dysplasia and eventually gastric adenocarcinoma.

Chronic autoimmune gastritis, also known as type A gastritis, affects the body and fundus of the stomach; and it represents an example of a type IV hypersensitivity.

In chronic autoimmune gastritis, there are autoantibodies against H+/K+ ATPase on parietal cells and intrinsic factor.

As a result, there’s an increased secretion of gastrin, hypergastrinemia, which is a hormone that has a trophic effect on enterochromaffin-like cells, or ECL cells; therefore, these individuals are at risk for developing neuroendocrine tumors.

Autoantibodies against intrinsic factor lead to decreased absorption of vitamin B12, resulting in pernicious anemia.

Finally, in chronic autoimmune gastritis chief cells are also lost and this results in decreased levels of serum pepsinogen.

On the other hand, Helicobacter pylori-associated chronic gastritis, also known as type B gastritis, is the most common type of gastritis.

Usually, it affects the antrum but it can spread to the body of the stomach.

Moreover. when the gastritis is mostly confined to the antrum, gastric acid levels are normal or elevated.

Now, for your exam, it’s important to know that Helicobacter pylori inflammation decreases the number of somatostatin-secreting cells, also known as delta cells.

As a result, pH of the gastric fluid decreases, and the risk for developing duodenal ulcers and duodenal gastric metaplasia increases.

On the other hand, in extensive Helicobacter pylori-associated chronic gastritis, when inflammation spreads to the body of the stomach, level of gastric acid is typically low; therefore, there’s an increased risk of developing neuroendocrine tumors just like in chronic autoimmune gastritis.

Individuals with chronic gastritis can be asymptomatic, but in some cases, they can present with epigastric pain, nausea, and vomiting.

Generally, chronic gastritis treatment is aimed at the underlying cause.

It usually involves antacids or antibiotics, because eradication of Helicobacter pylori improves symptoms and decreases the risk of malignancy.

Next, we have Ménétrier disease which is also called giant hypertrophic gastritis.

This is a form of gastritis which features hyperplasia of gastric mucosa and subsequent hypertrophy of gastric folds, also known as gastric rugae.

In Ménétrier disease, there’s an excess production of mucus, which is further followed by protein loss and finally parietal cell atrophy.

For your exam, it’s important to remember that Ménétrier disease is a precancerous condition.

These individuals typically present with weight loss, anorexia, vomiting, epigastric pain, and edema, due to protein loss. You can remember the clinical presentation by the acronym WAVEE.

Now let’s focus on Peptic ulcers which are chronic lesions in areas exposed to excess gastric acid and peptic juices.

Based on their location, there are two types of peptic ulcers: gastric ulcers, which are most commonly located in the antrum and gastroesophageal junction; and duodenal ulcers, which are typically found in the proximal part of the duodenum, called duodenal bulb.

In 70% of cases, gastric ulcers are caused by Helicobacter pylori infection, the same ones that cause chronic gastritis.